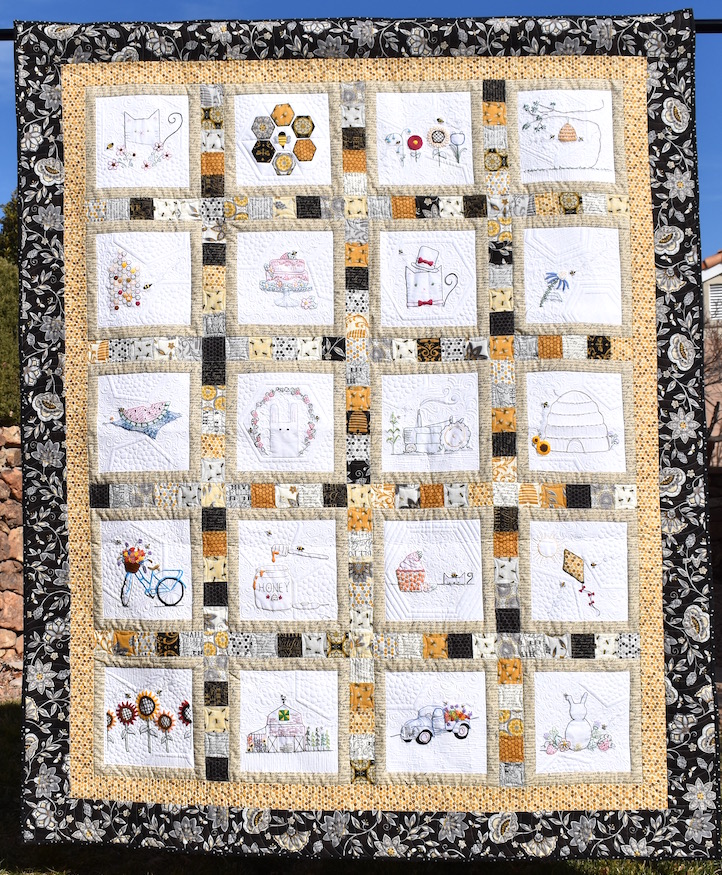 This quilt was a quilt-a-long from the Moda Bake Shop in mid 2016, designed by Pamela Morgan at @sweetlittlestitches.  I started the blocks at the time the quilt-a-long began, but took my time and had fun finishing them all.  There was a really helpful Facebook group for the project, and I got a lot of inspiration from the group for the embroidery.  Between that group and Google/YouTube, I learned a ton about embroidery!

After assembling the top, I had to get up the courage to quilt it.  I was a part of the HandiQuilter Ruler Club during the last 6 months of 2017, and as part of that group we got this cool oval ruler.  I wanted to try it out, so I decided to use it for continuous curves in the sashing. 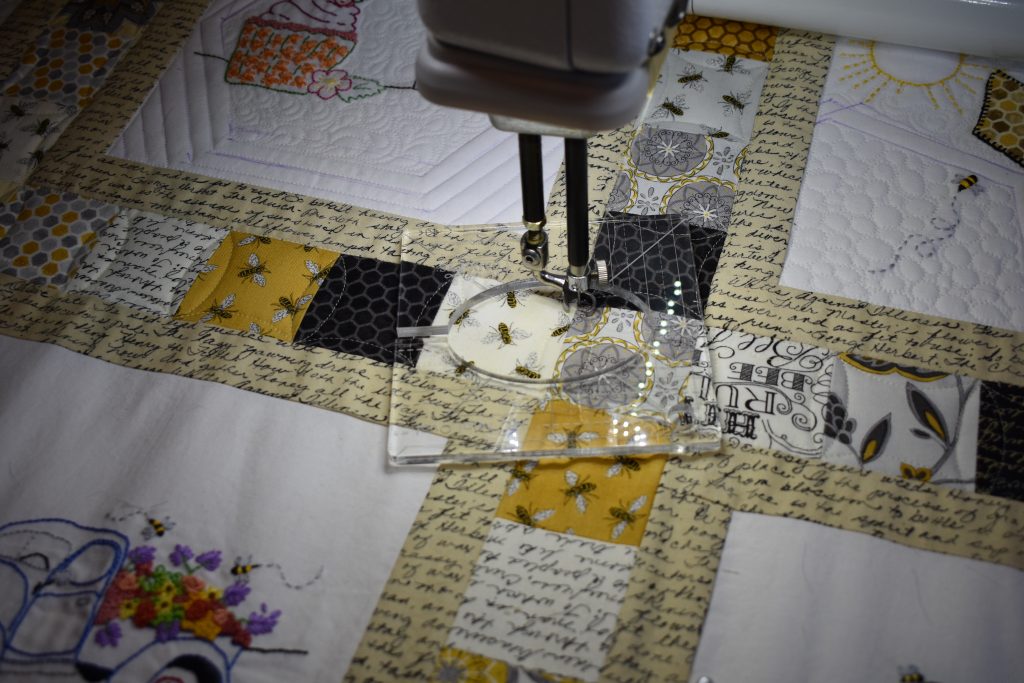 For the rest of the quilt, I drew a lot of inspiration from Charisma Horton from Charisma’s Corner Long Arm Quilting in Washington state.  Her quilt, and the one she quilted for another group member, was absolutely beautiful.  She had the idea to add an echoed hexagon to the quilting, which looked awesome, so I wanted to add that design element to my quilting as well.

This guy took a long time to quilt, between the dense quilting and trying to complete it in December around the holidays, but it was fun to do and I love how it came out.

Here he is just off the frame, with some nice detail: 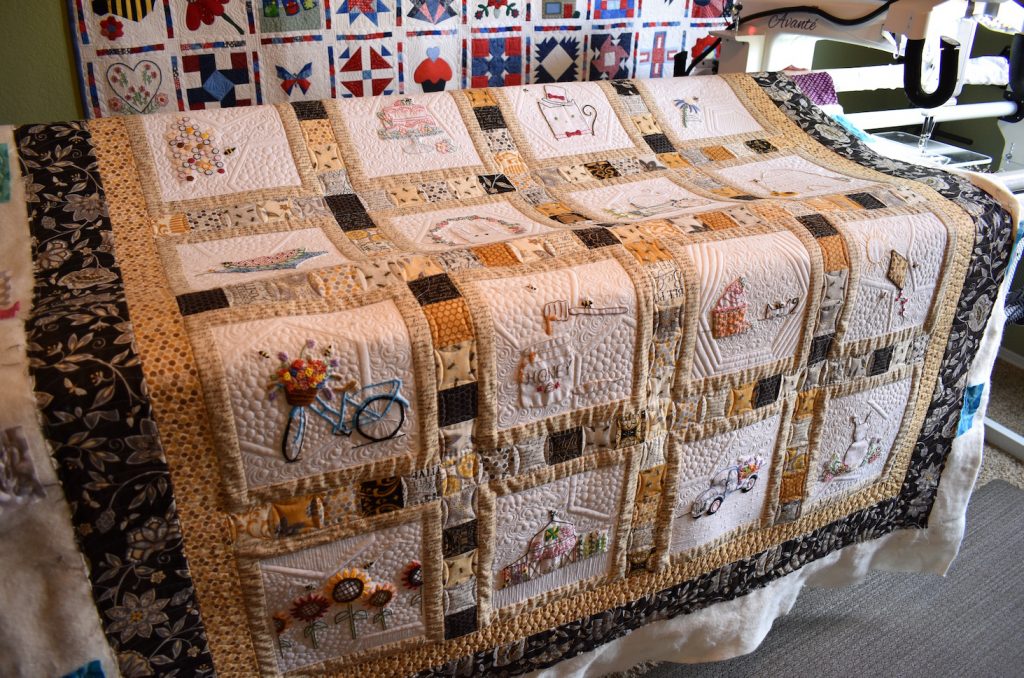 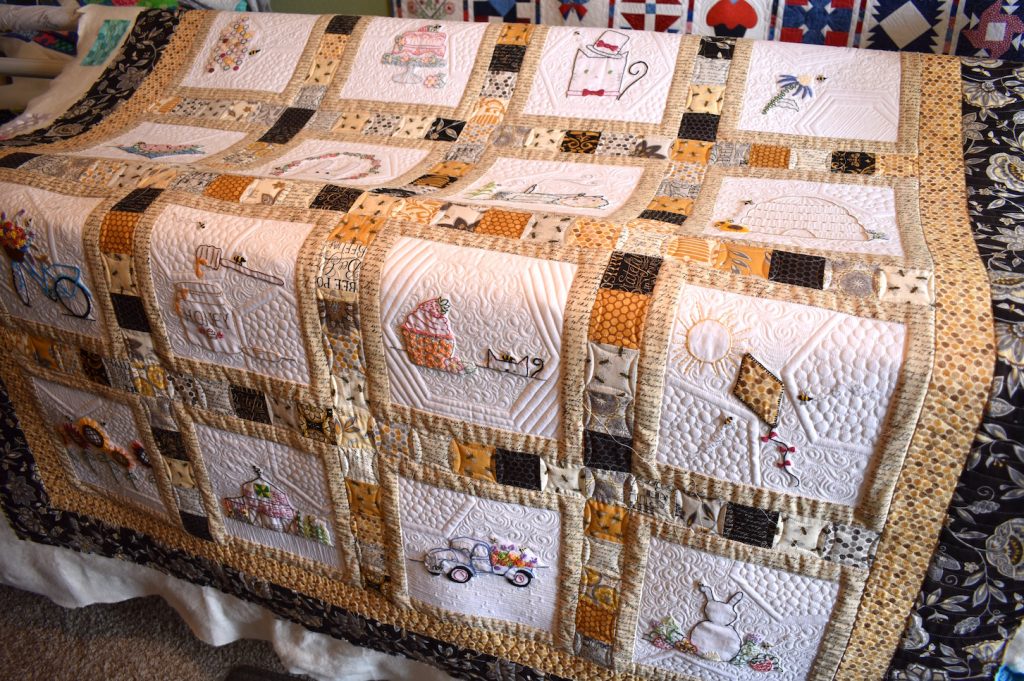 and here is the finished top

I got a new camera for Christmas, so please excuse the following oversharing of photos and detailed shots: 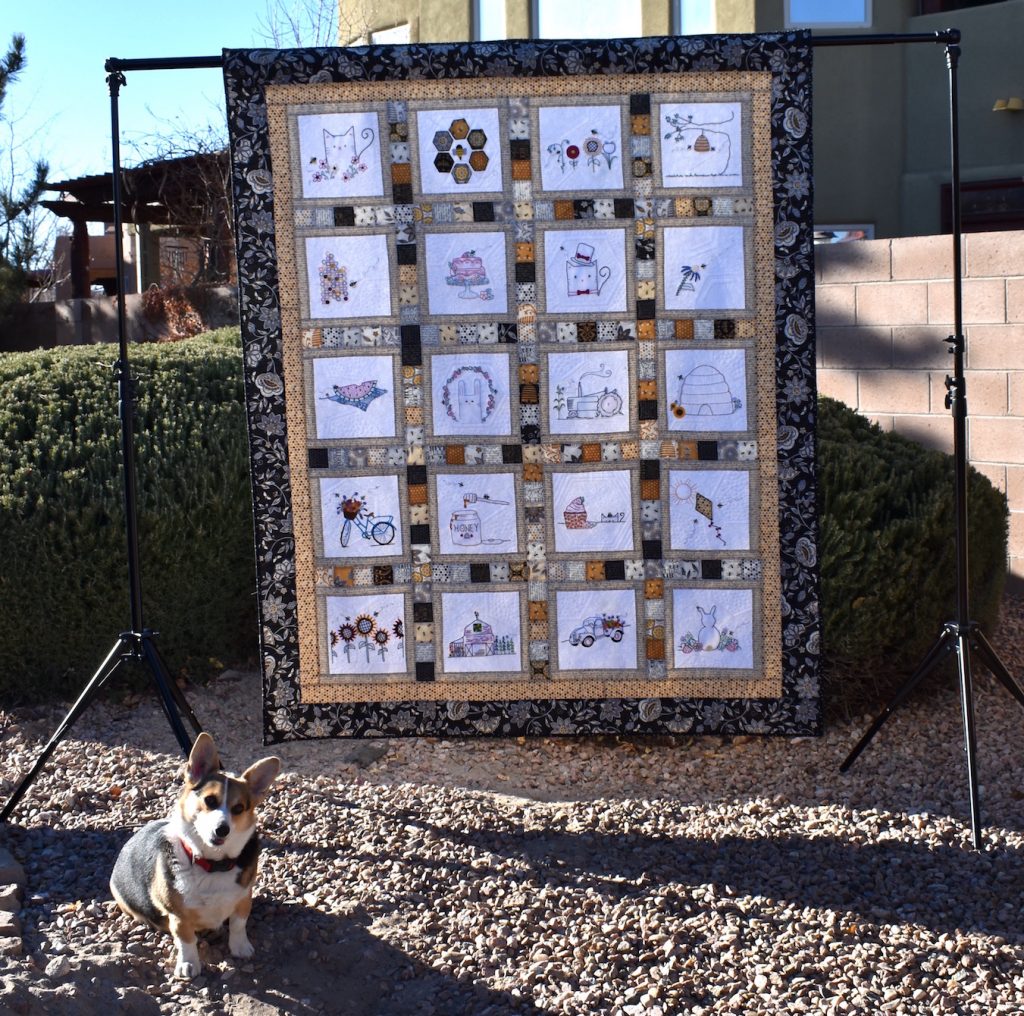 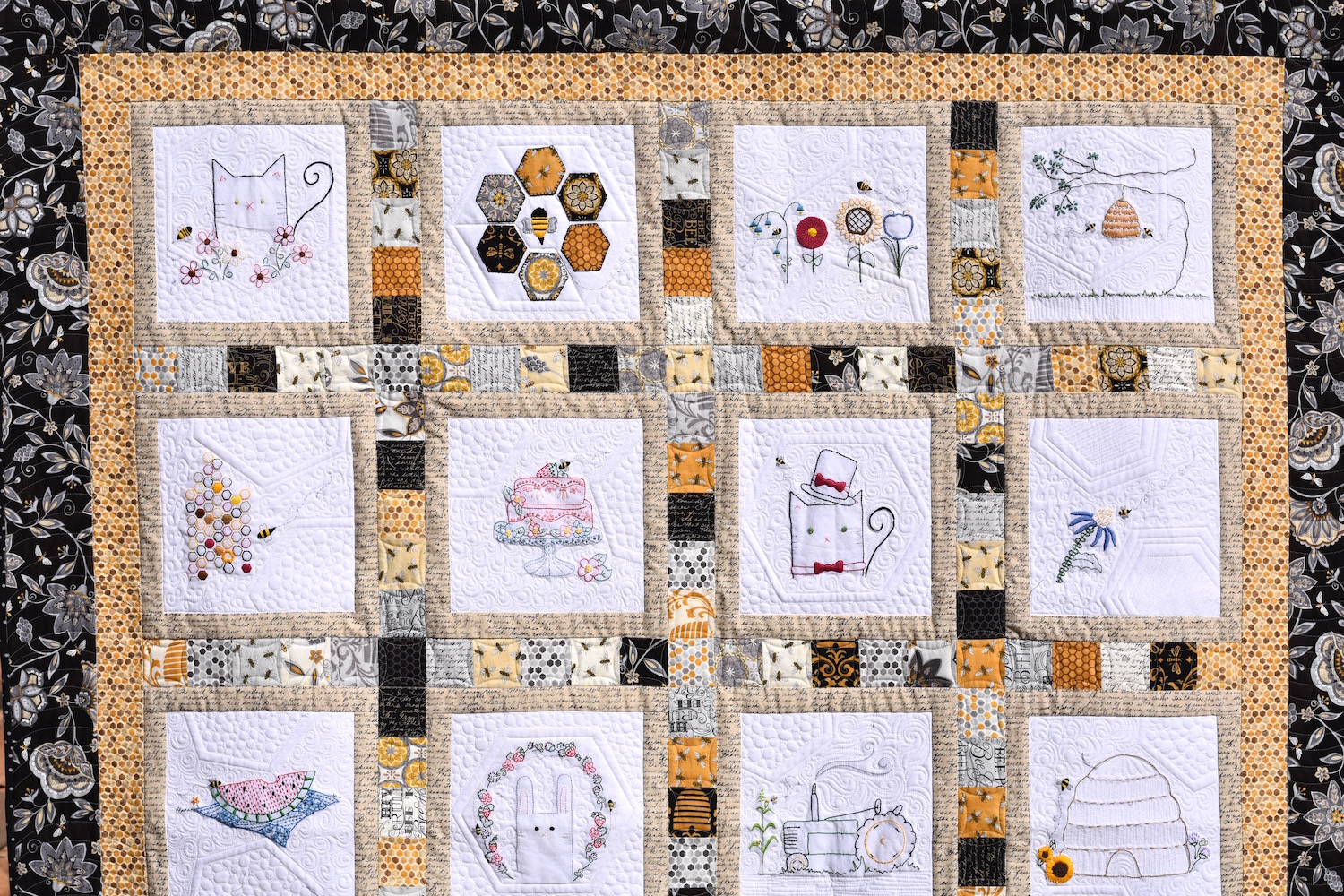 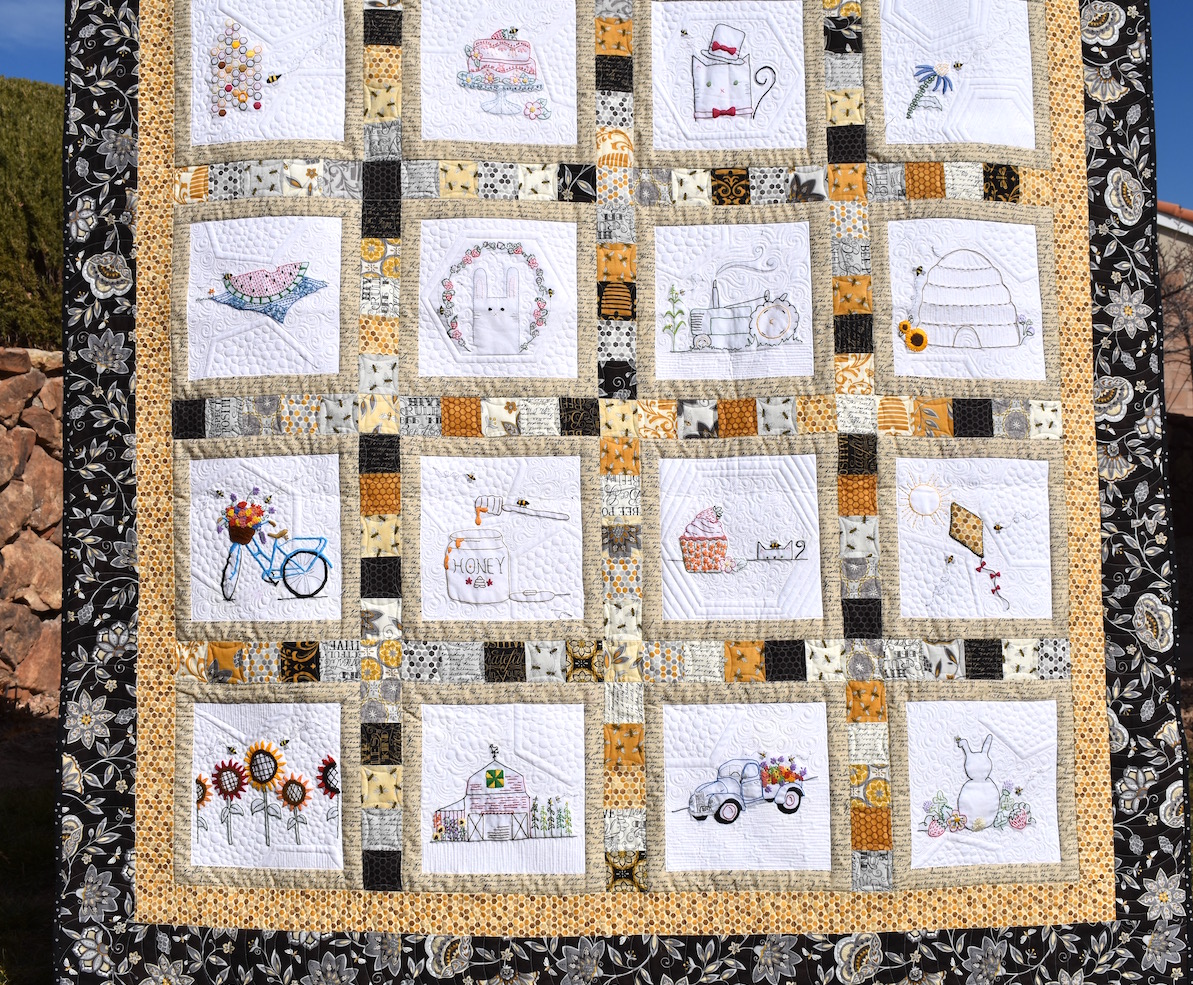 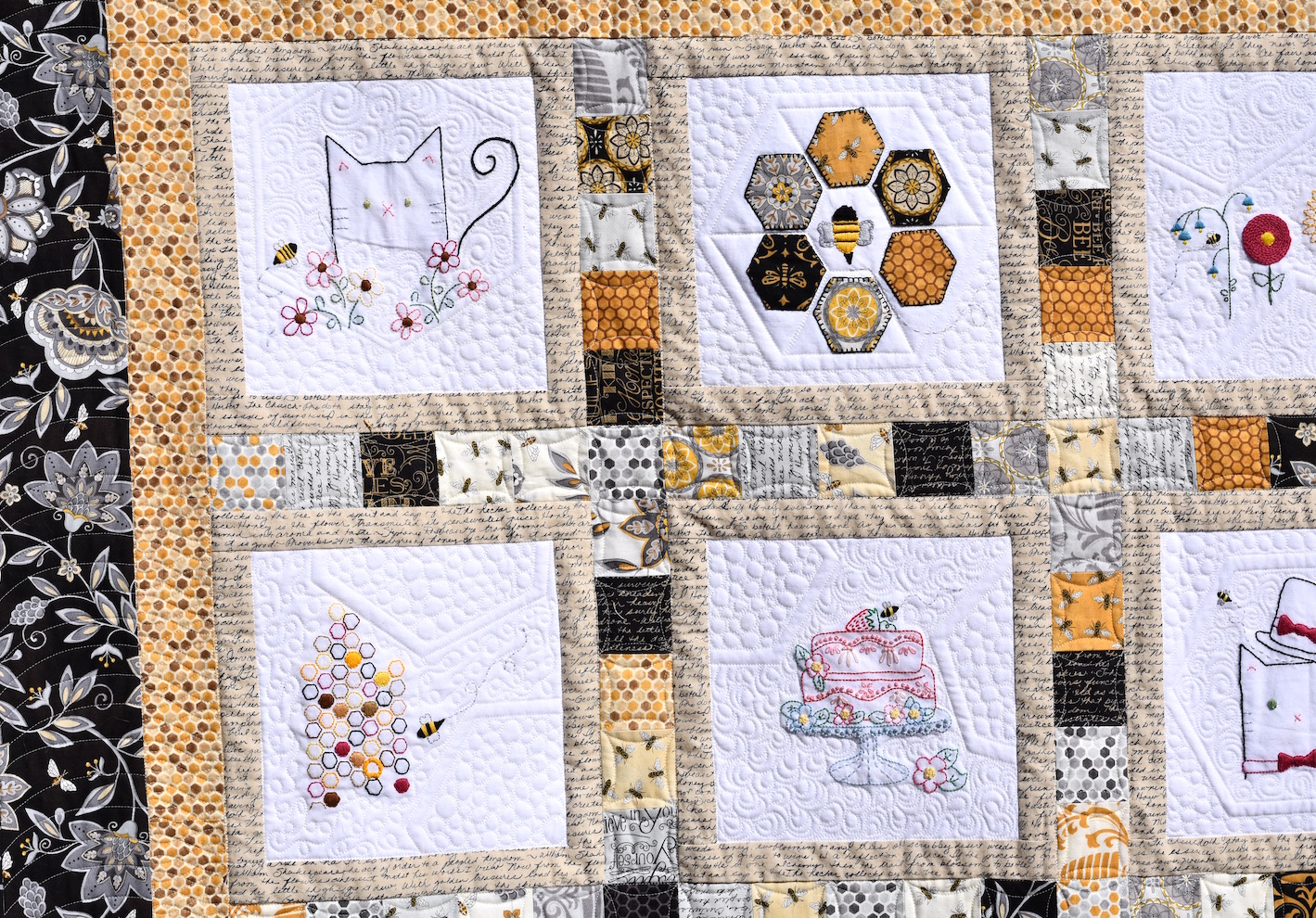 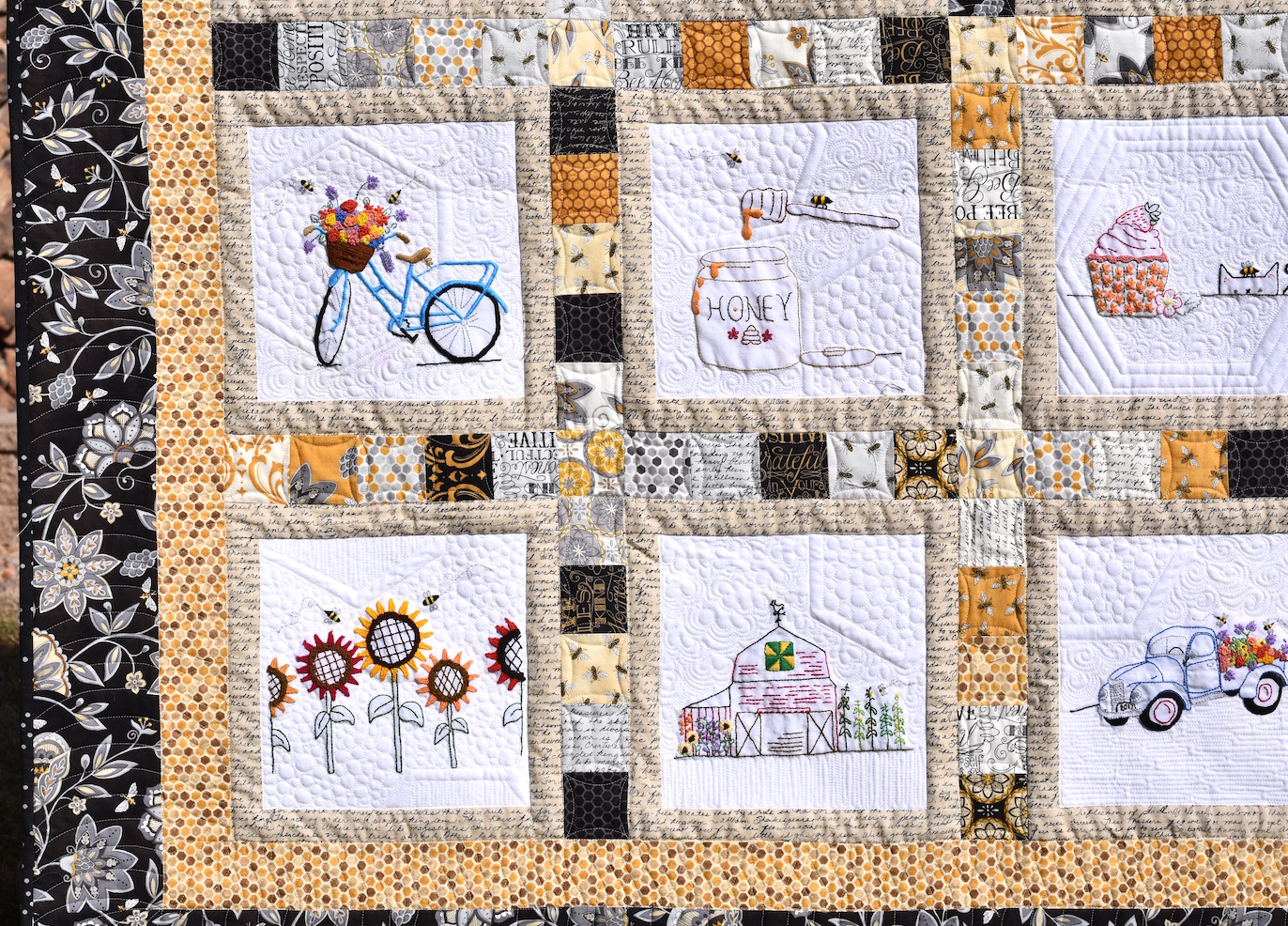 These blocks are my favorites: 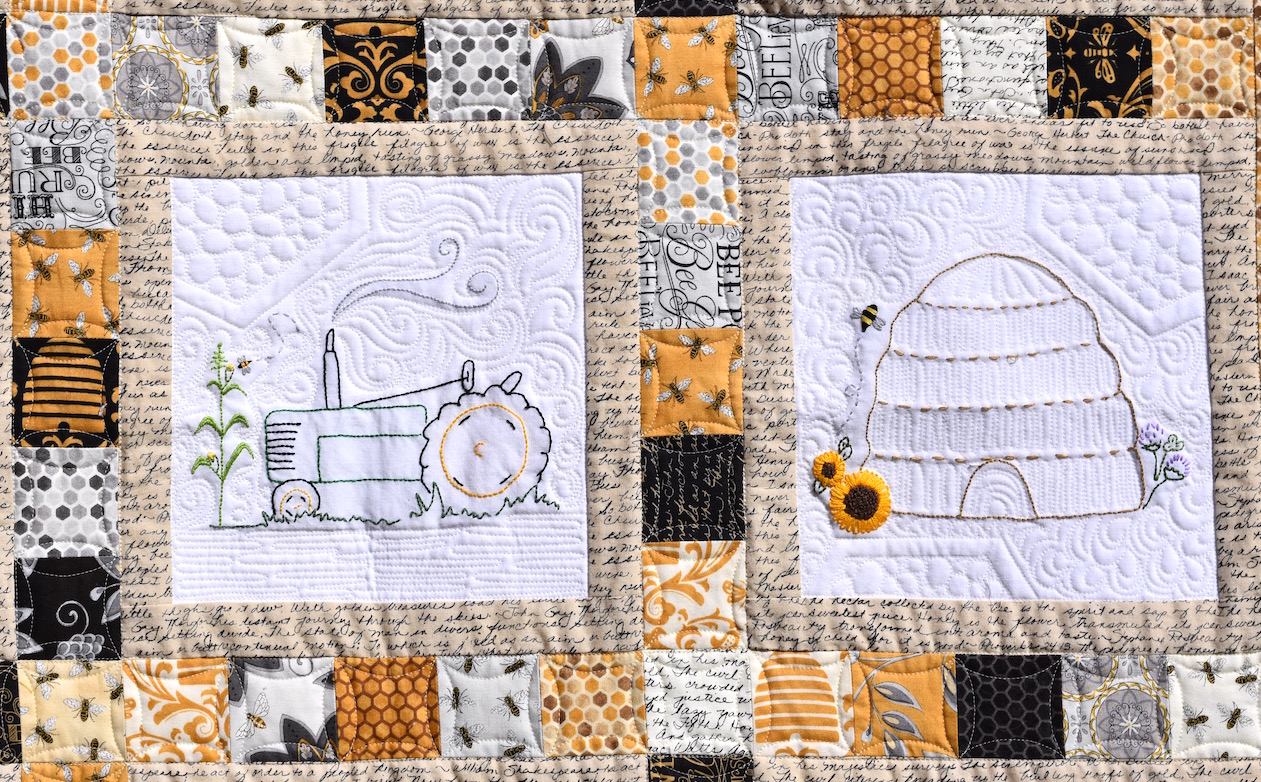 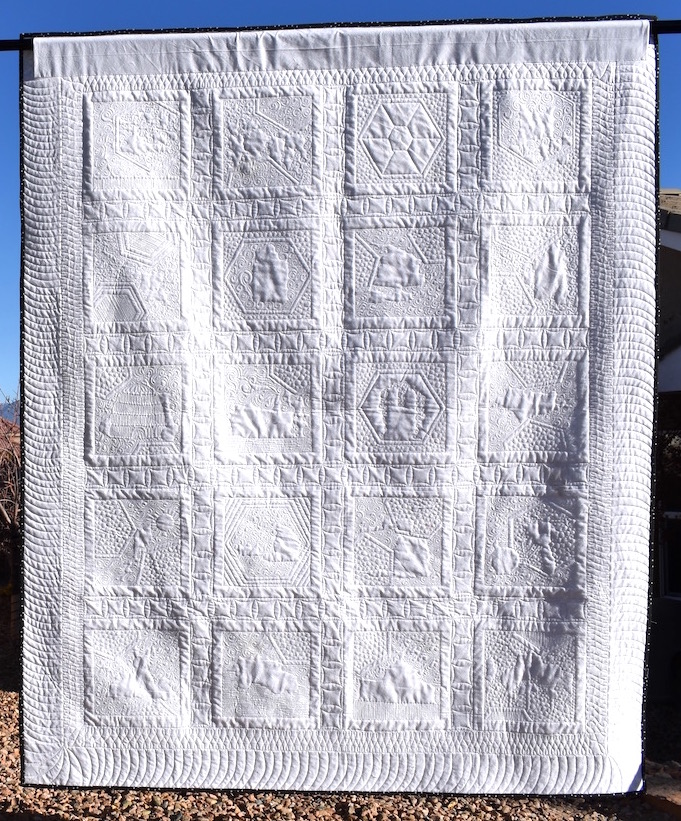 It was a pretty day in January for a photo shoot – look at those New Mexico skies: 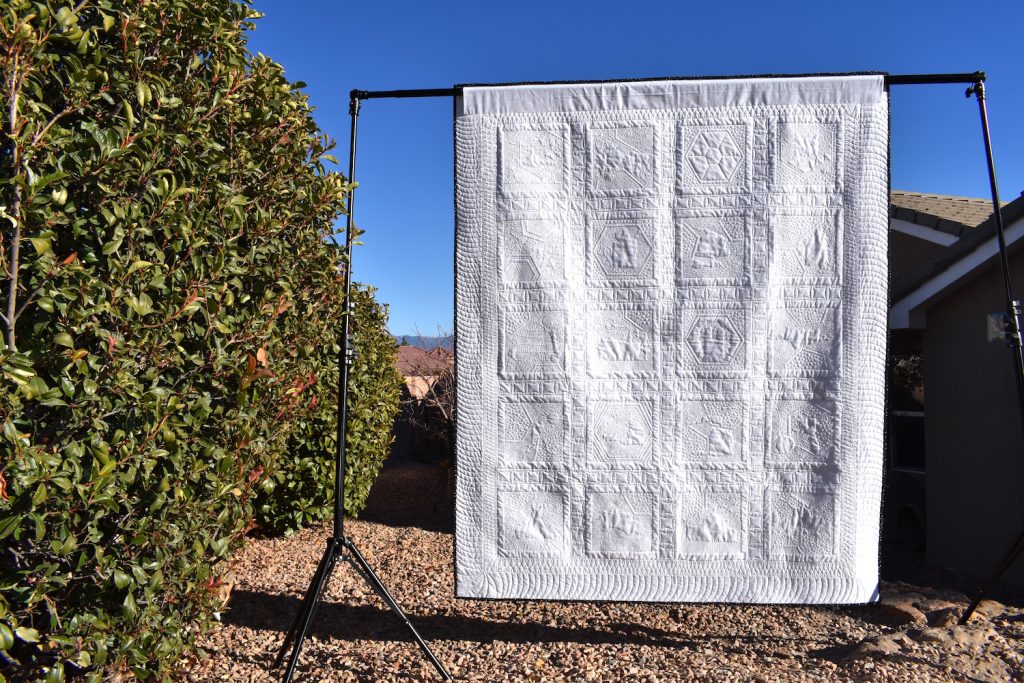 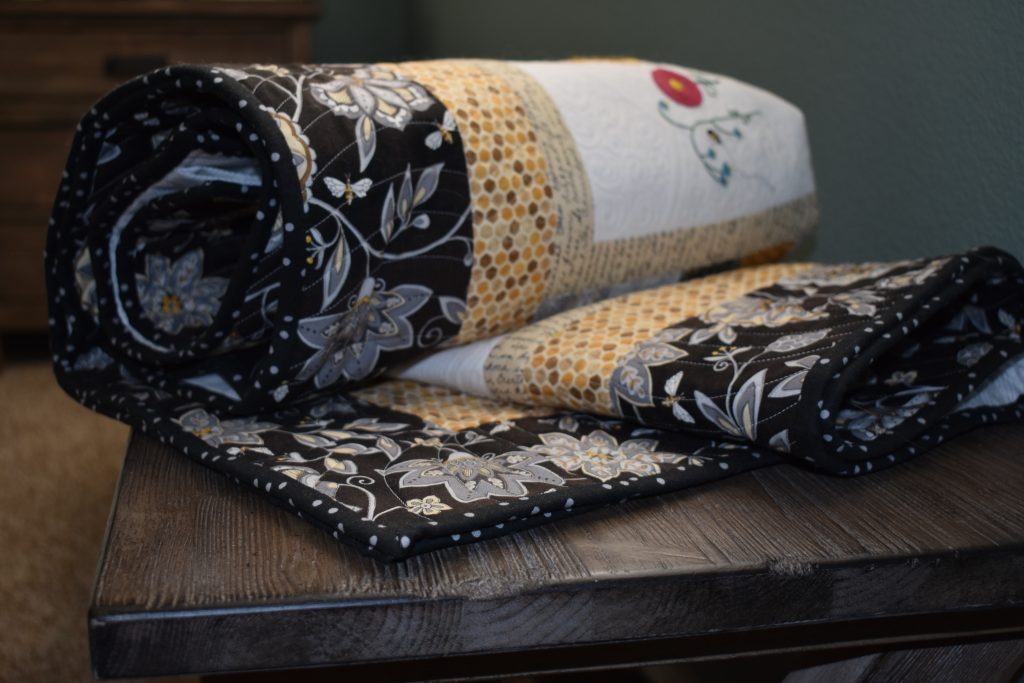 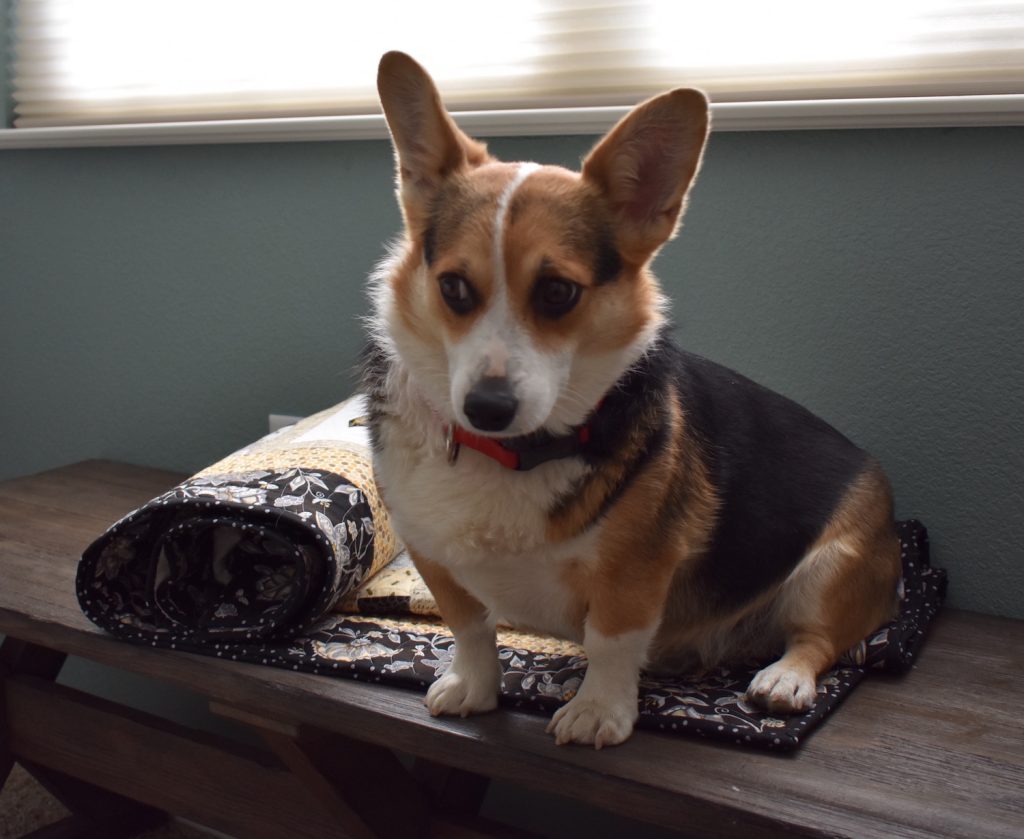 I had fun making all the blocks and doing the quilting was a fun challenge.

Also linking up with Wednesday Wait loss, as this as been on my FAL list for a year and a half, and Let’s Bee Social. 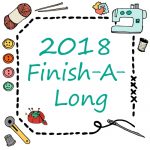 11 thoughts on “The Bee Quilt”