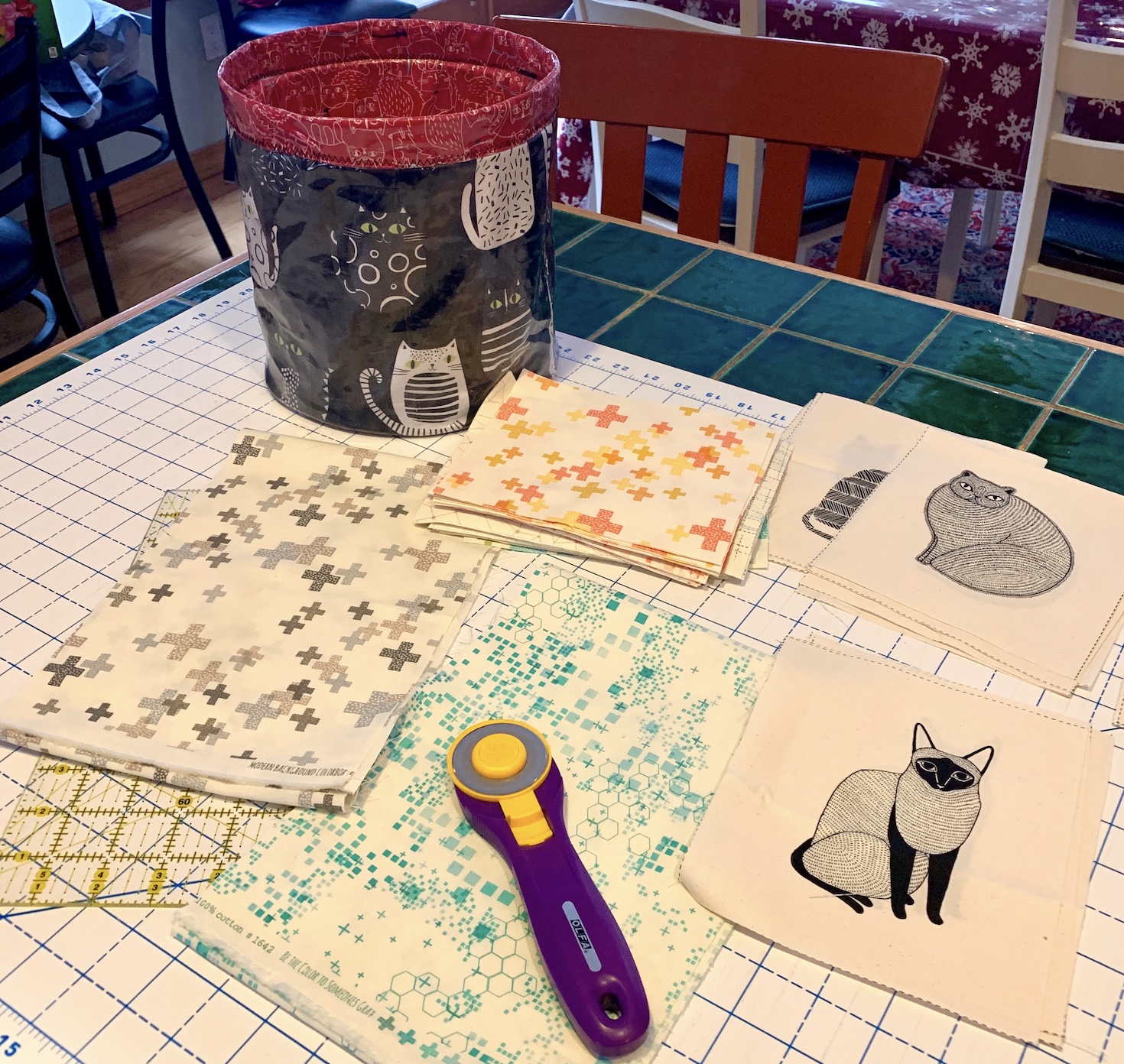 My gang started doing these retreats a year ago.  We found a great Airbnb in the East Mountains of Albuquerque and, after 3 retreats last year, have a retreat booked and planned for every quarter of 2019.

Albuquerque doesn’t get a ton of snow, but we are a mile high in altitude and typically get some snow a few times during the winter.  However while Albuquerque, which is on the West side of the mountain, doesn’t get a ton of snow, the East side of the mountain does frequently get quite a bit of accumulation. We got a bunch of snow between Christmas and New Years’, and with our retreat so early in January we were very worried that we wouldn’t be able to get to the house.  In the end we could get to the garage of the house, but couldn’t drive our cars down the long driveway hill to the house.  We decided to do the retreat, but it meant we had to carry all of our stuff down the hill (tables, sewing machines, projects, food, clothes, etc…!).

This is the hill – this photo is taking from the house…the garage is there at the top of the hill: 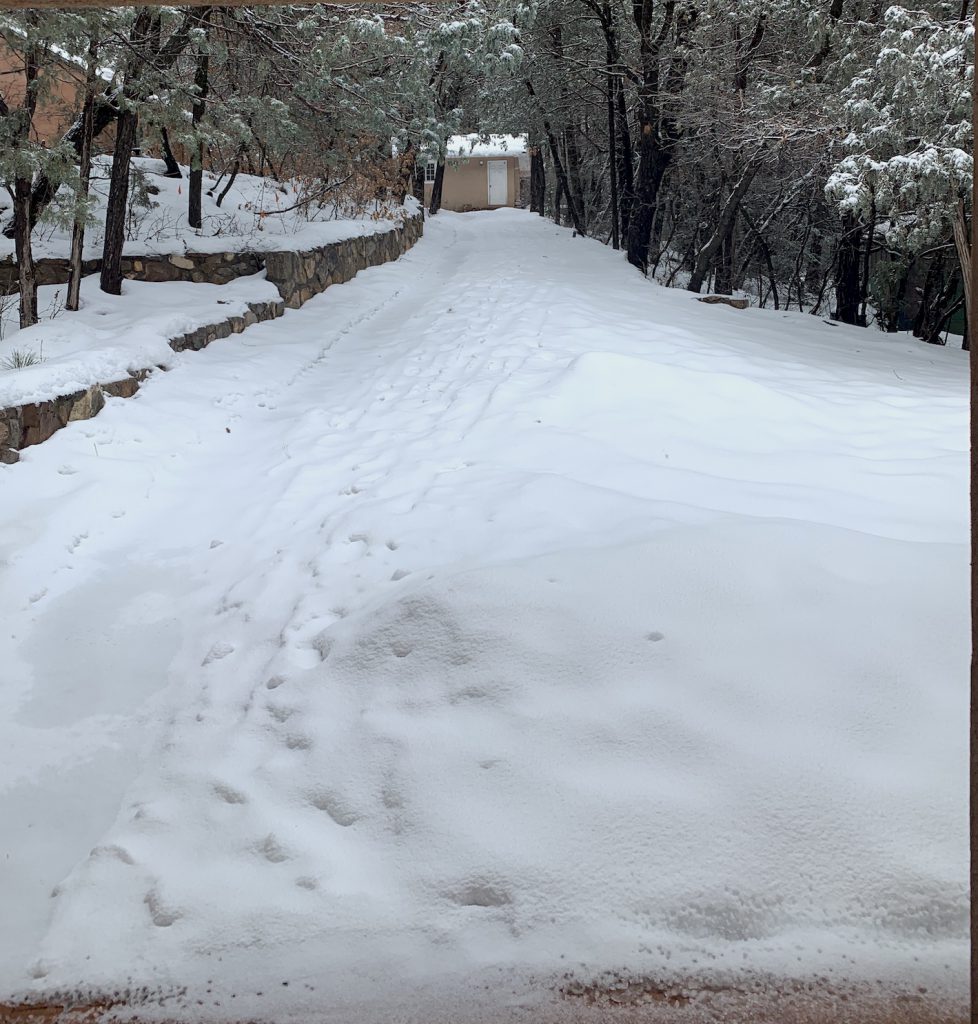 We went on Thursday and it did snow on Friday morning.  At that point we were safely ensconced in the house so we were happy to see the snow.  The view from the window: 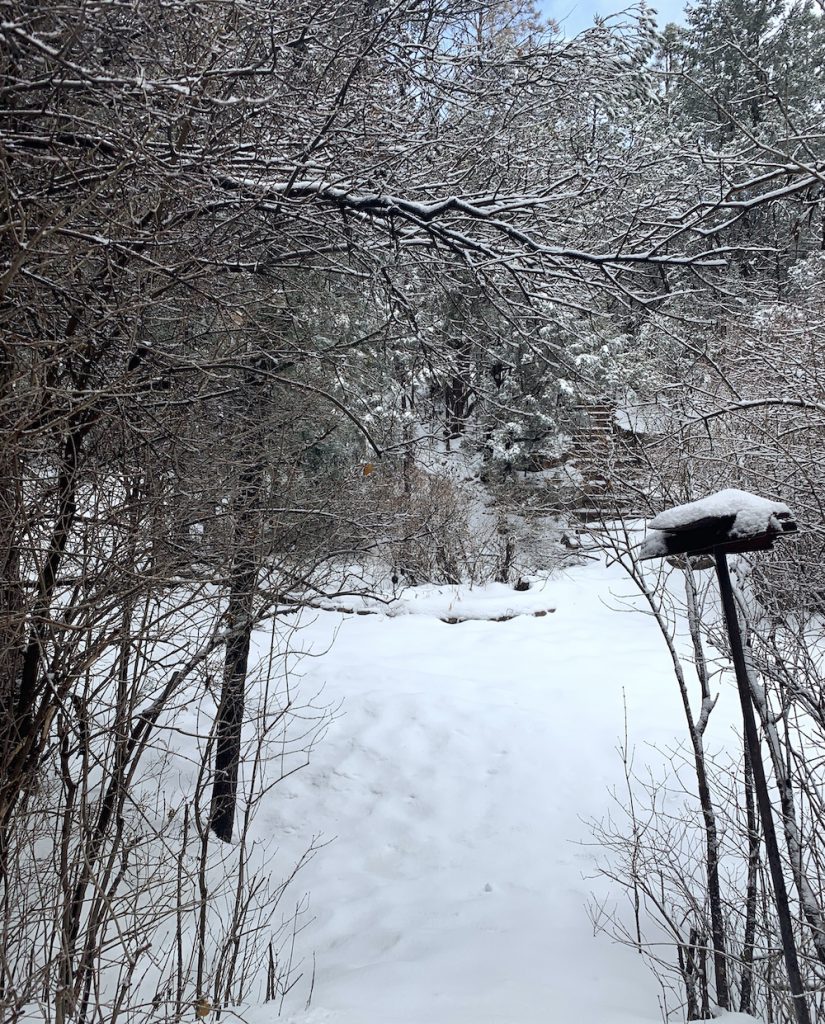 I have recently completed a bunch of UFOs so I was looking forward starting new projects during the retreat.  I completed Bee Blocks for January – Emily is making a charity quilt: 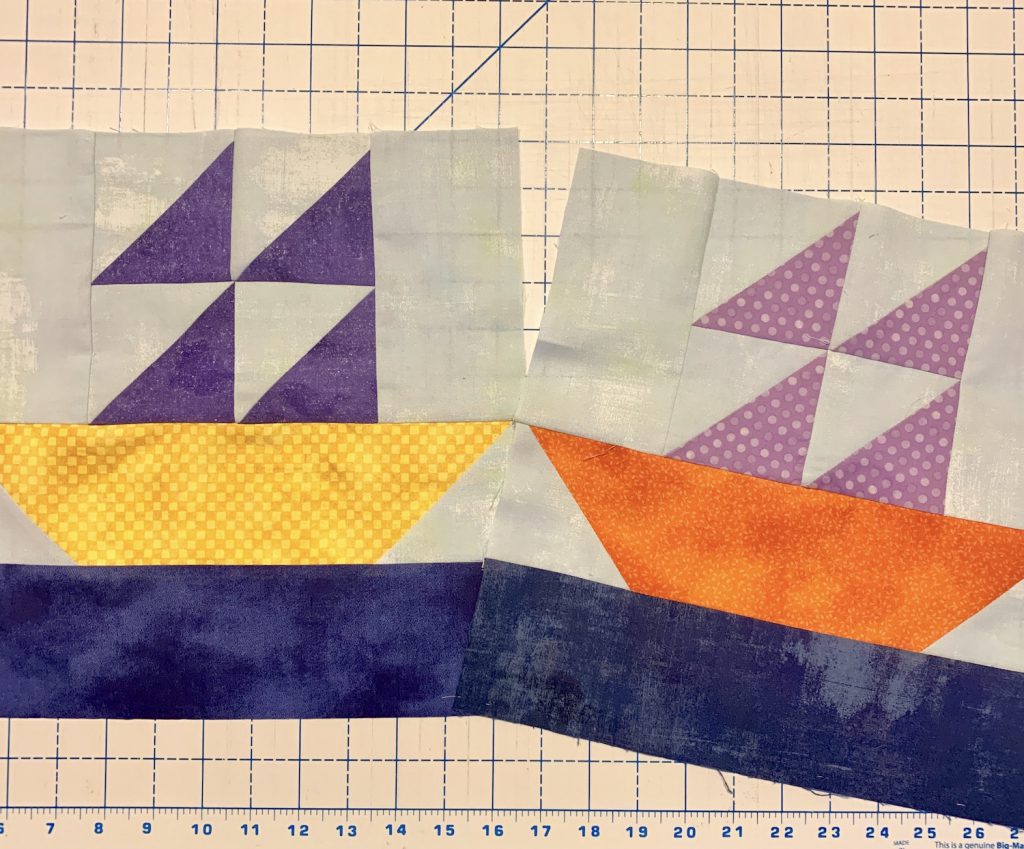 I bought the materials to make a Stacking Pop up can at the end of December.  I covered all the fabric with vinyl so that scraps and thread will slide out of it.  The spring inside makes it collapsable so it is easy to pack up and take along.

The materials – I love the cats! 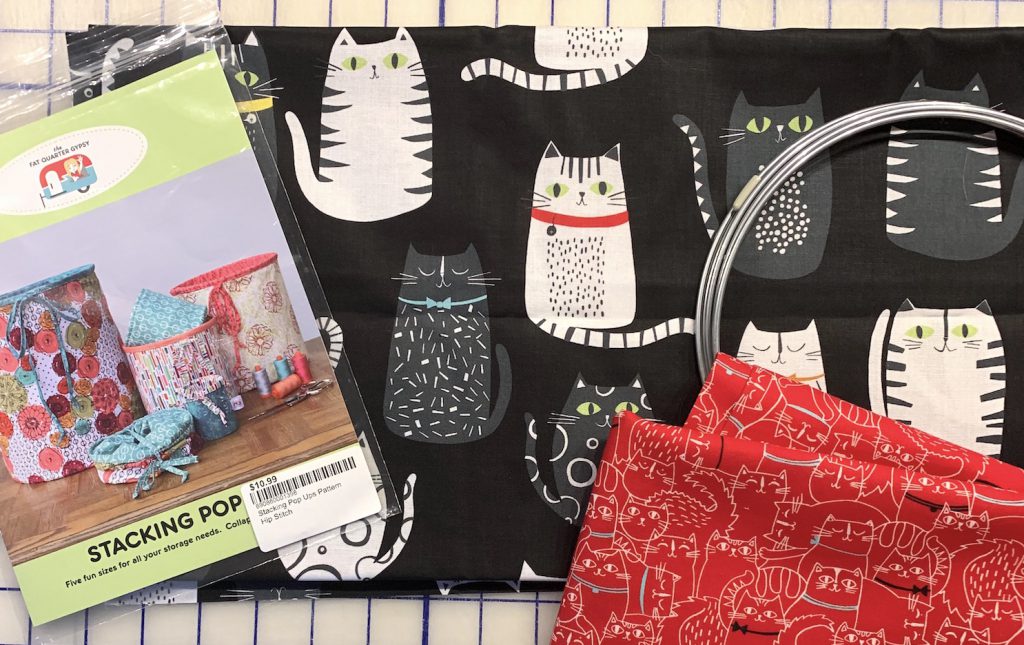 The finished can, in use for cutting another project: 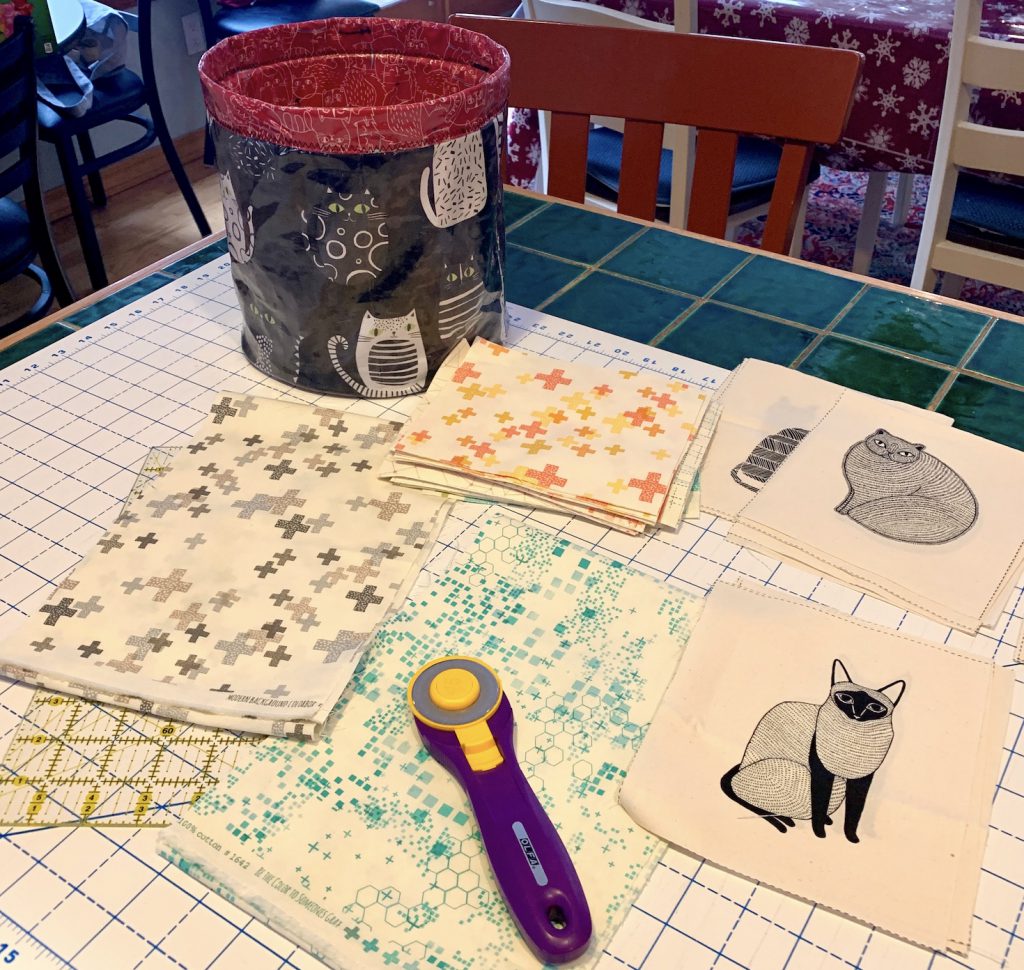 From there I moved on to a Sweetwater BOM from 2015 that I had prepped and ready to finish the top.  I stitched the rows together and added borders.  I think I’ll quilt this up so it is very soft, cuddly and comfy: 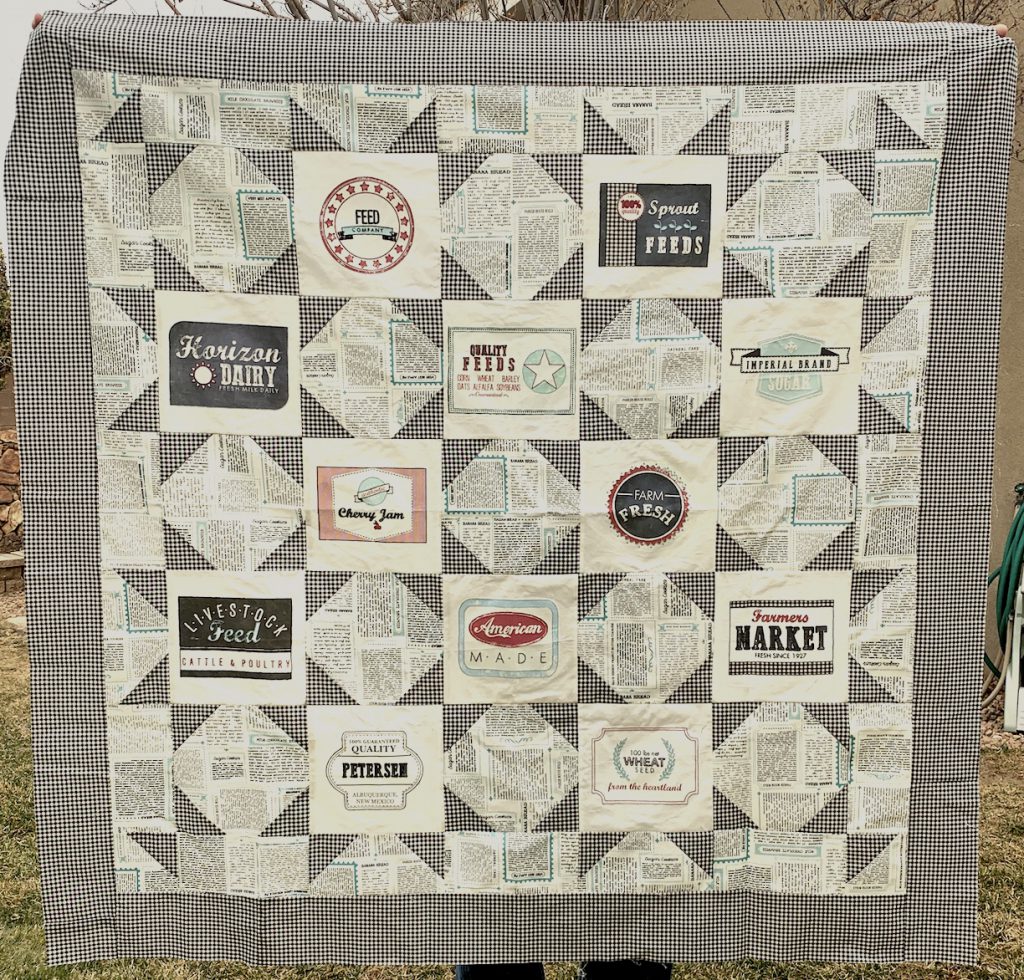 I bought this quilt kit in October because I have always loved these Gingiber panels.  The big kitty reminds me of my kitty Sophia.    The kit was missing a piece so I had to wait to get home to finish the top: 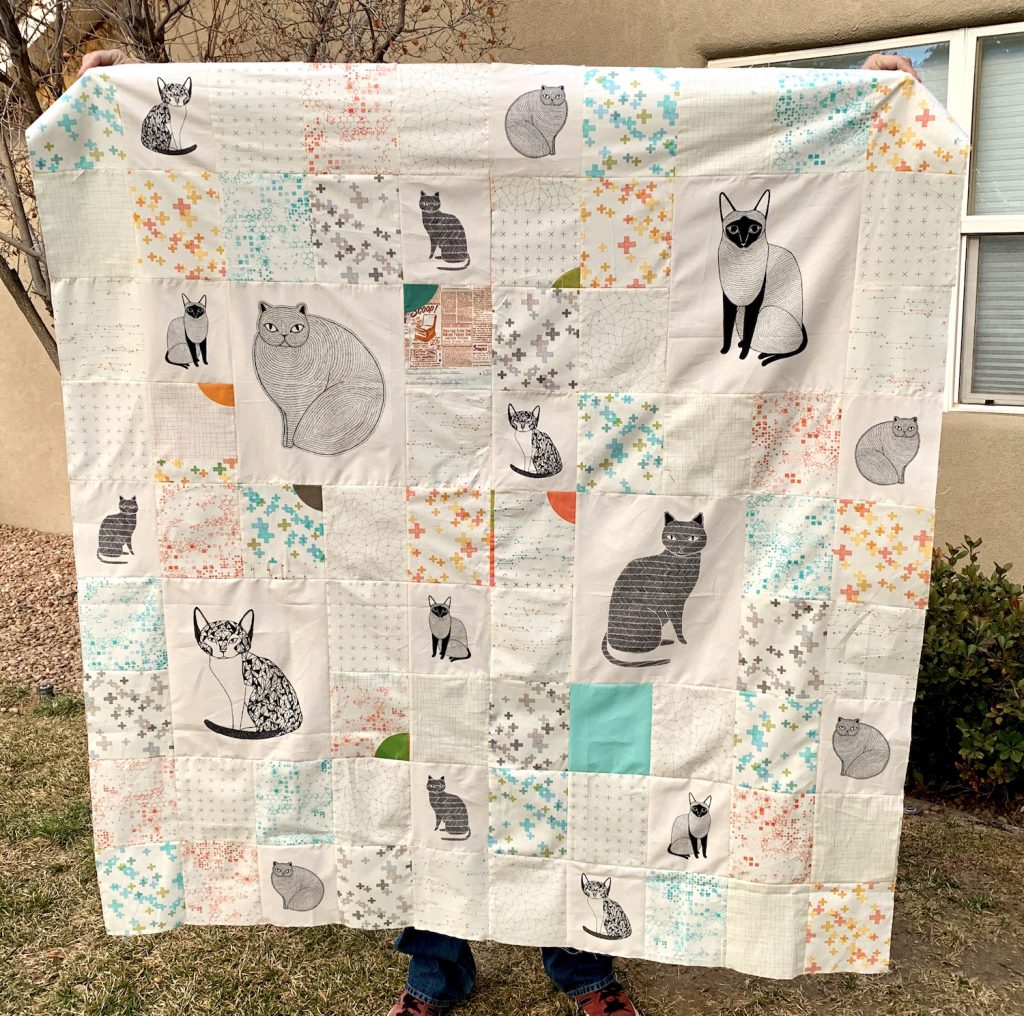 And finally I completed this top from leftover jelly roll strips and solids from my stash.  This is a pattern from the Midnight Quilt Show which I thought would be good for my leftovers and be fun to practice quilting strips/rows: 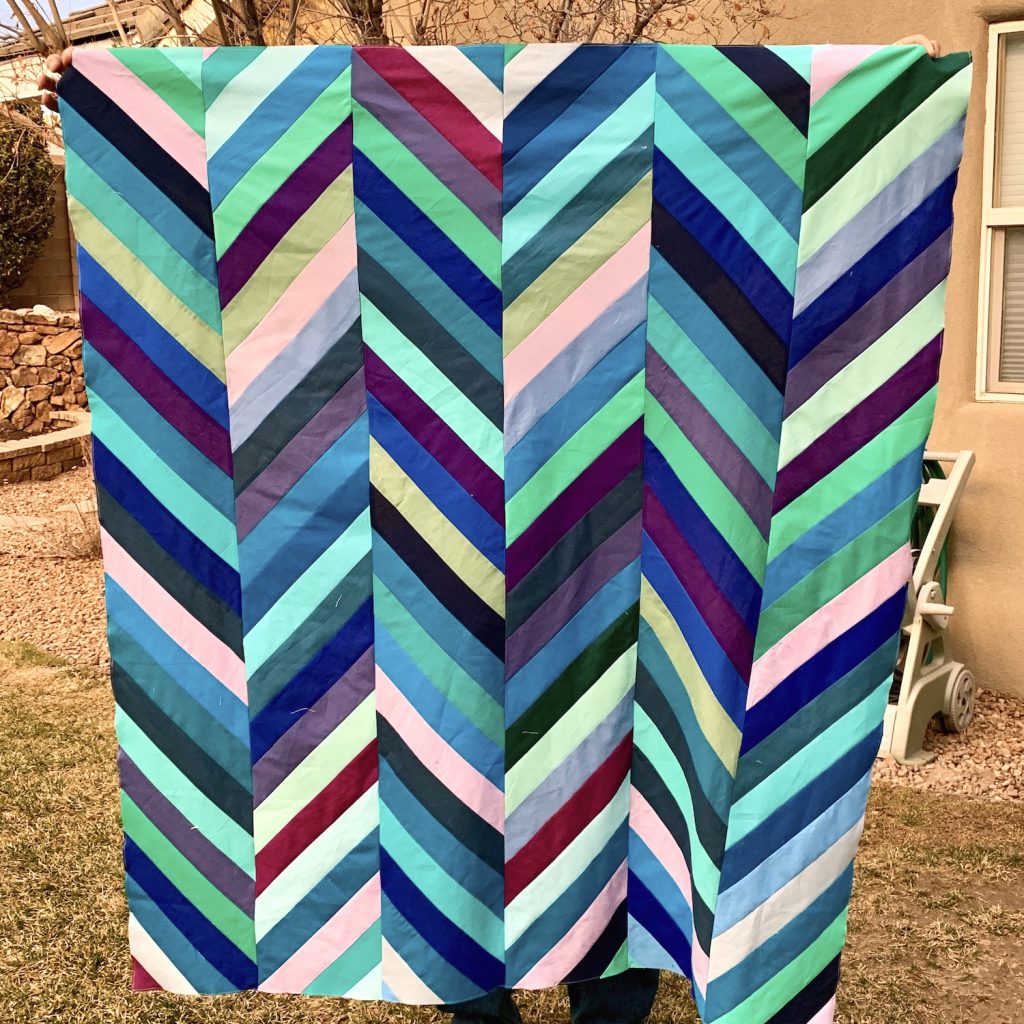 Of course I brought supplies for another 5 projects, but there is only so much you can do in a weekend!  Plus after a few days of focused sewing my back and neck were getting kind of sore!

Our next retreat is in May and I’m already looking forward to it.  It is so great to get away, chat, snack ( 🙂 ) and get in some focused sewing time.

The Stacking Pop Up can was on my Q1’19 FAL list, so I will link up there at the end of the quarter.