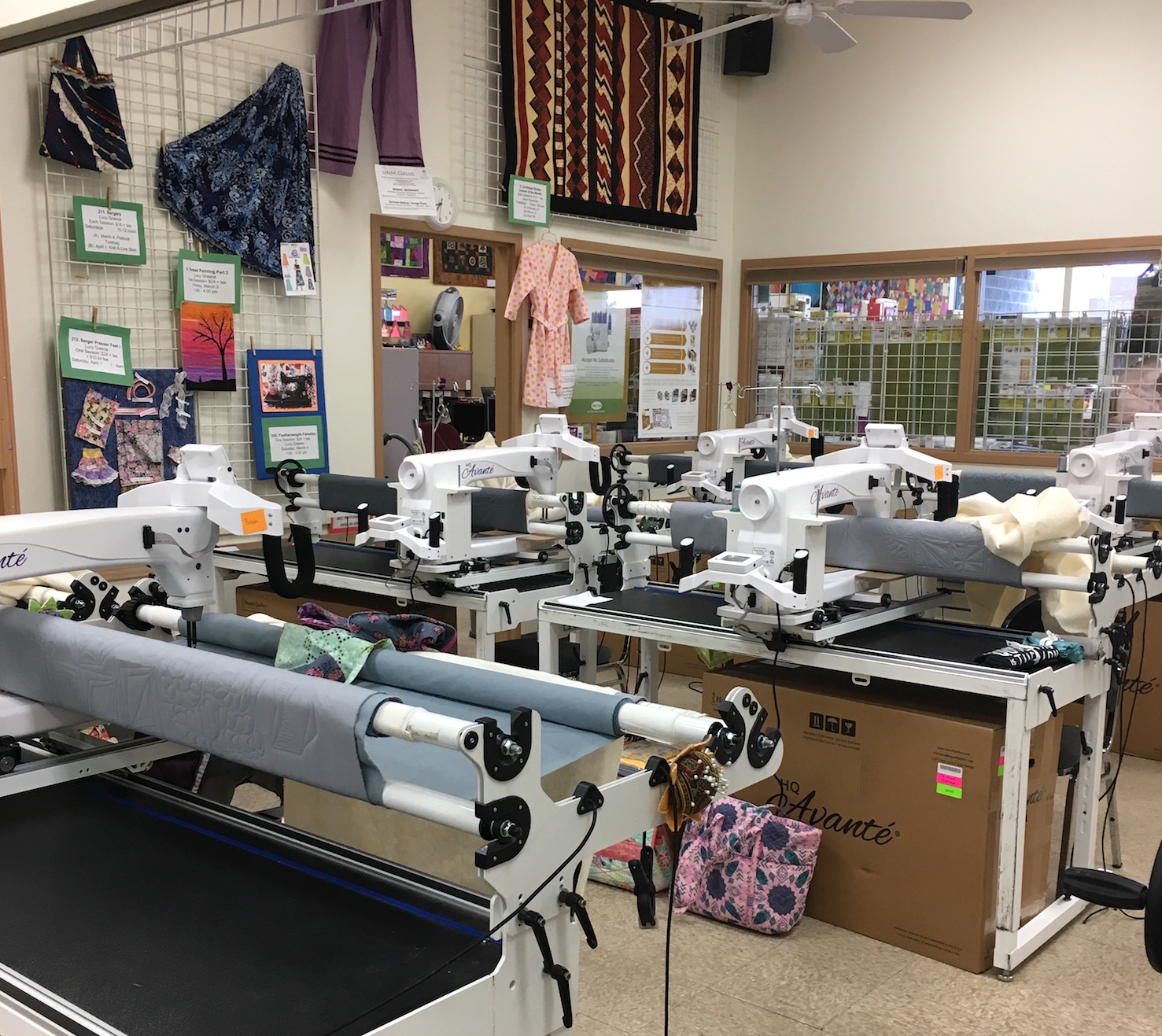 My Modern Quilt Guilt is great, and they really know how to put on an event.  Last year they brought in Victoria Findlay Wolfe, and this year it was Angela Walters.  She held a lecture, a dinner, and four days of workshops.  It was truly an awesome weekend.

When I first signed up for the workshops I hadn’t yet bought the long arm.  I signed up for 2 workshops, as well as the dinner, and originally planned to take the class on my domestic machine.  However after I bought my long arm I was able to make a request and get on a long arm for the classes, which was really great.

I am a big Angela fan.  I have 4-5 of her books and have taken at least 2 of her Craftsy classes.  I find her funny, approachable and clear, and as an instructor she really does a good job giving you confidence and making it ok to not be perfect.  Because of all of this, I was really looking forward to the events!

The workshops were held at the shop where I bought my Berninas and my Avante long arm.  They normally have 2-3 long arms on the sales floor, so I was really excited to go into their classroom and see 9…yes 9!…Avante long arms.

All of them were on 4-foot frames to fit so many in the room, where there were also 4 Sweet Sixteen sit-down mid-arms and two big tables for students with their domestic machines.  I think Handi-Quliter, whom Angela is a spokesperson for, drove in a big truck with all of these machines.  They also had a Handi-Quilter educator available all day during the classes to help, answer questions…and change bobbins! 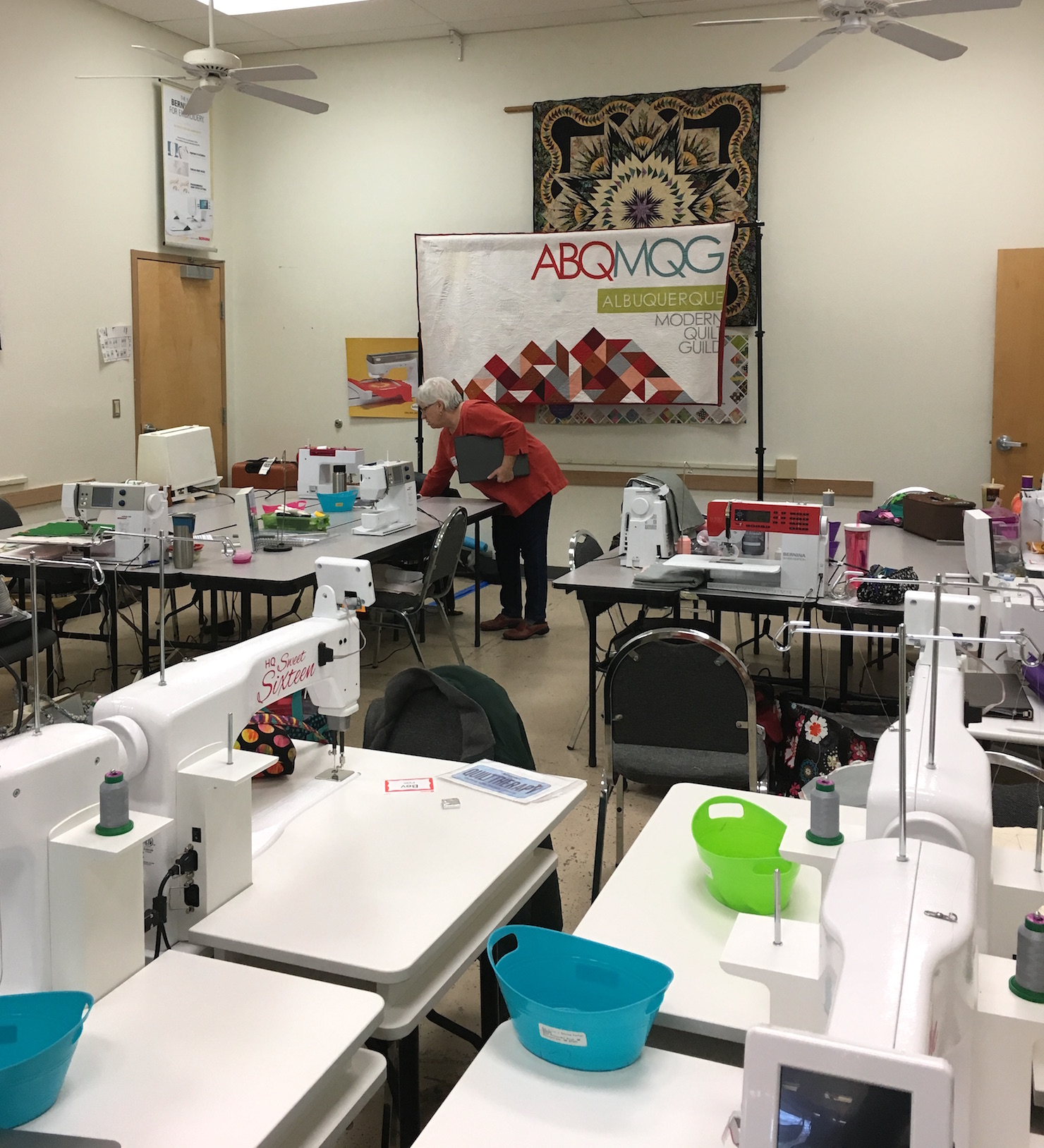 The first workshop was called Little Changes, Big Variety.  Honestly, I had seen most of these techniques in either her books or the Craftsy classes, but it was really great to get the instruction in person.  It was also so great to just work on the machine for the day and practice, practice, practice. 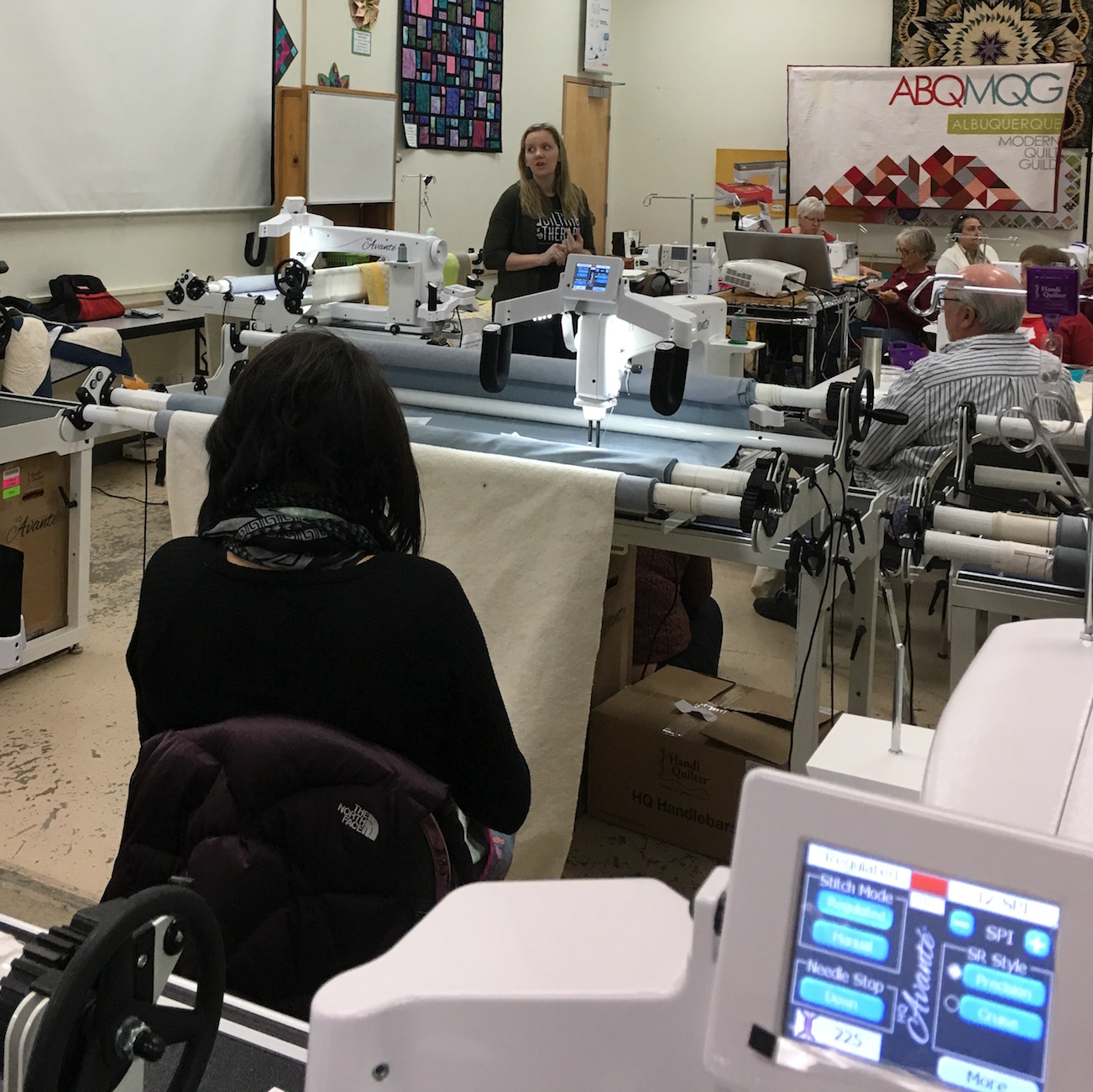 Between the Handi-Quilter educator and the other students I also got a lot of tips – like setting tension and what thread to use.  I knew that people like to match the color of the top and bottom threads to mask little tension issues, but I had no idea they were using different threads.  I learned about Bottom Line and SuperBobs – both are 60wt poly thread from Superior.  The suggestion was that a heavier thread in the bobbin can help keep the tension in the lighter upper thread from needing to be so tight.  Cool stuff – I bought 4 spools of Bottom Line to try out.

Here are some samples from my practice: 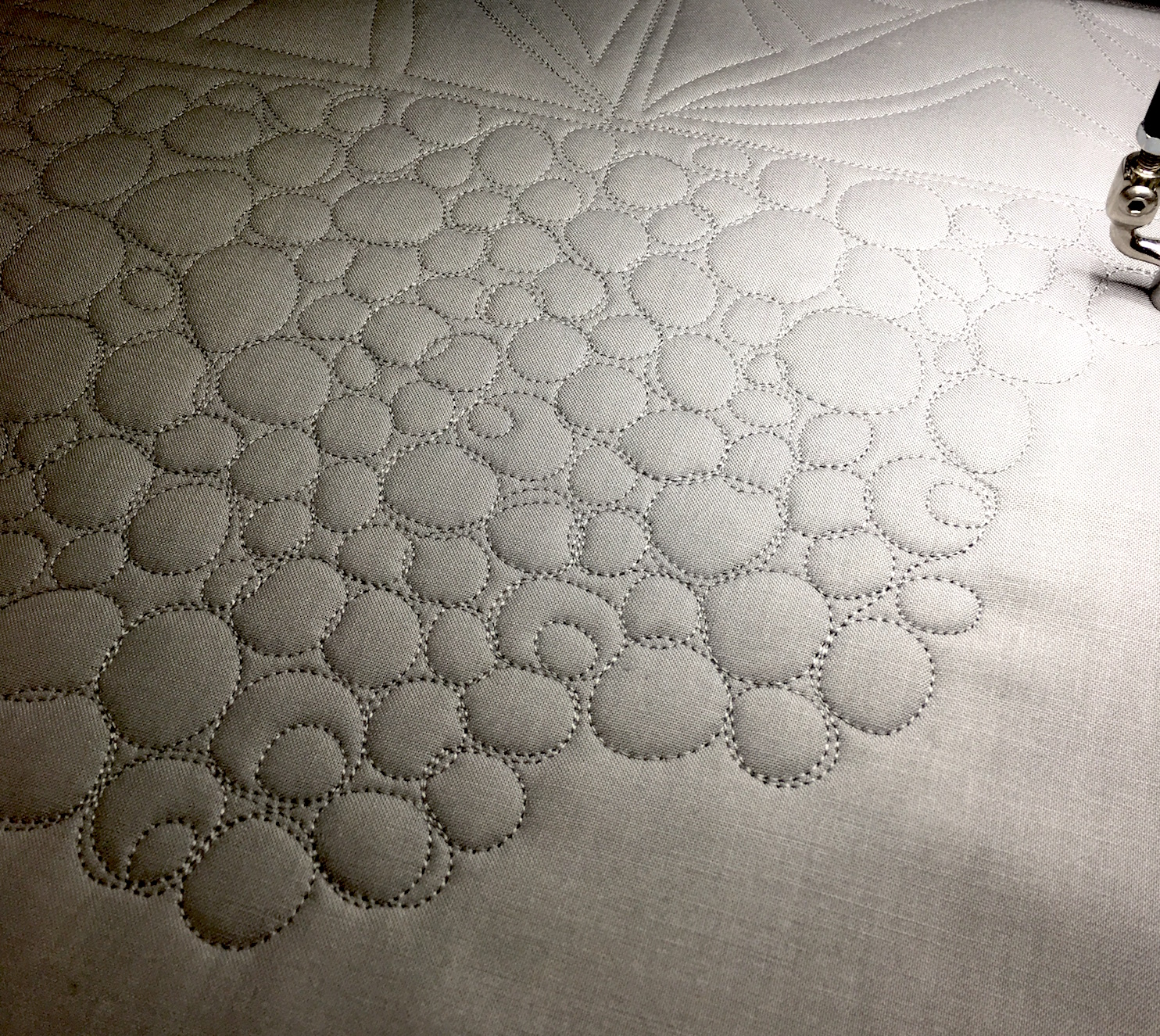 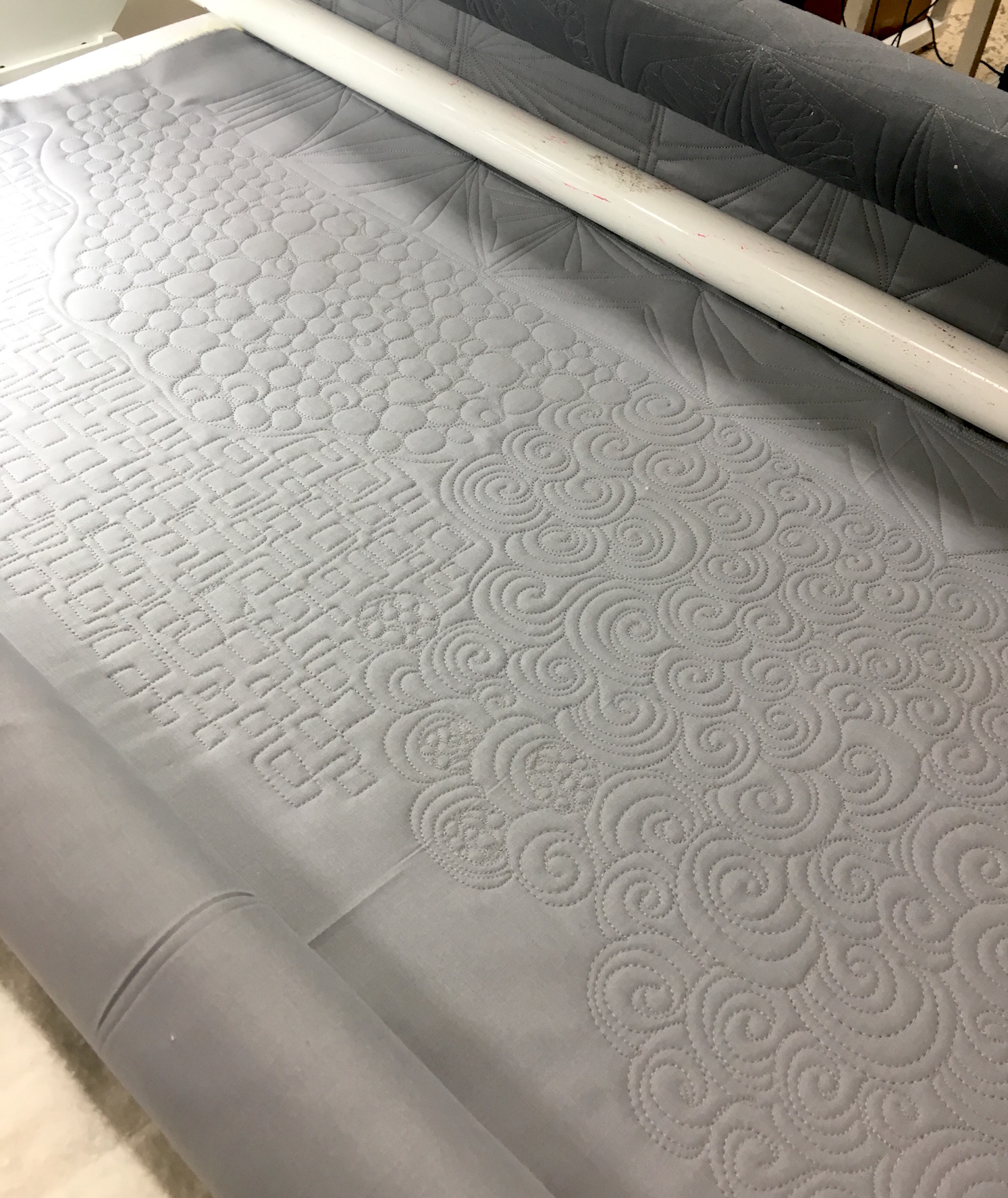 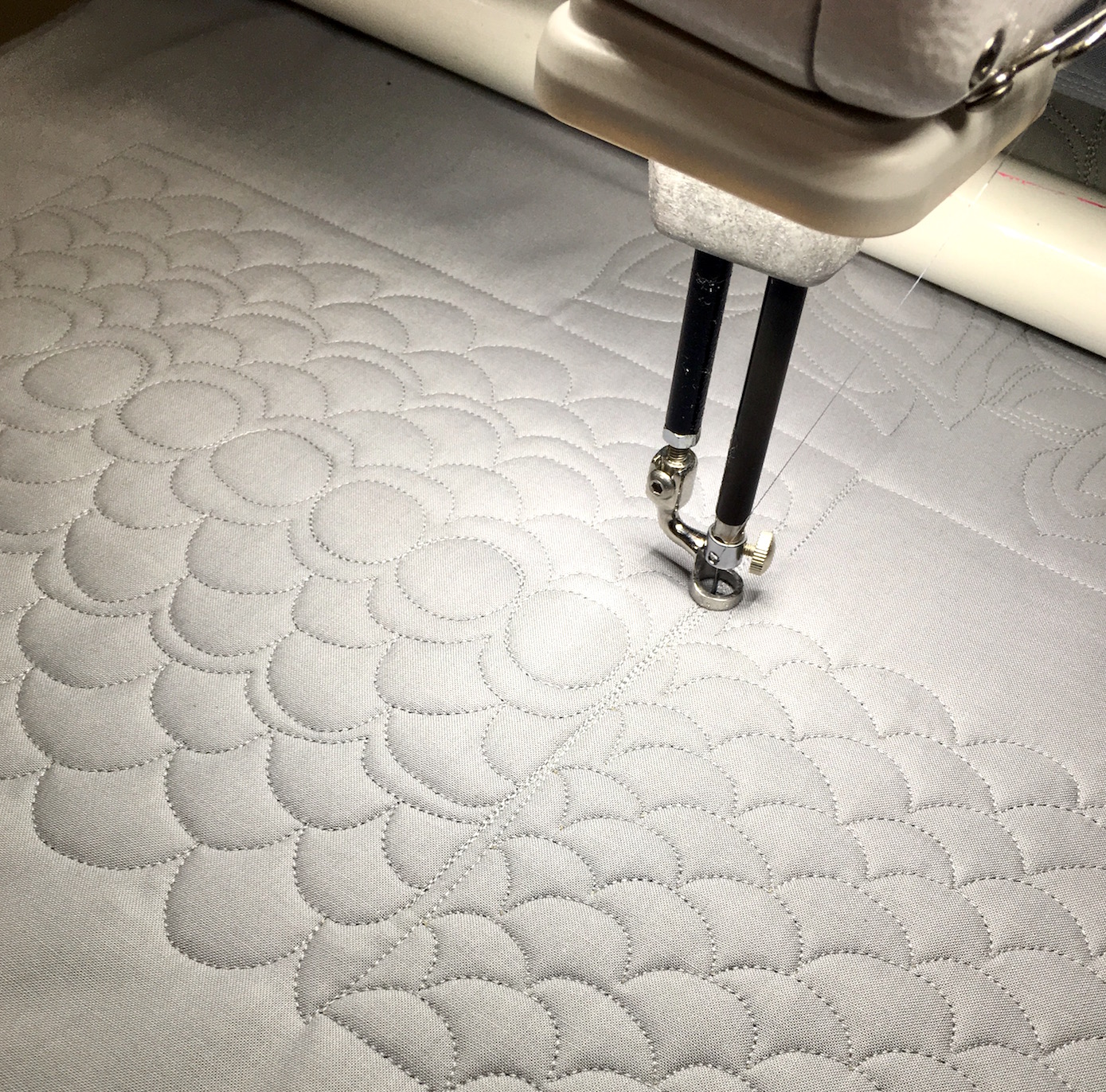 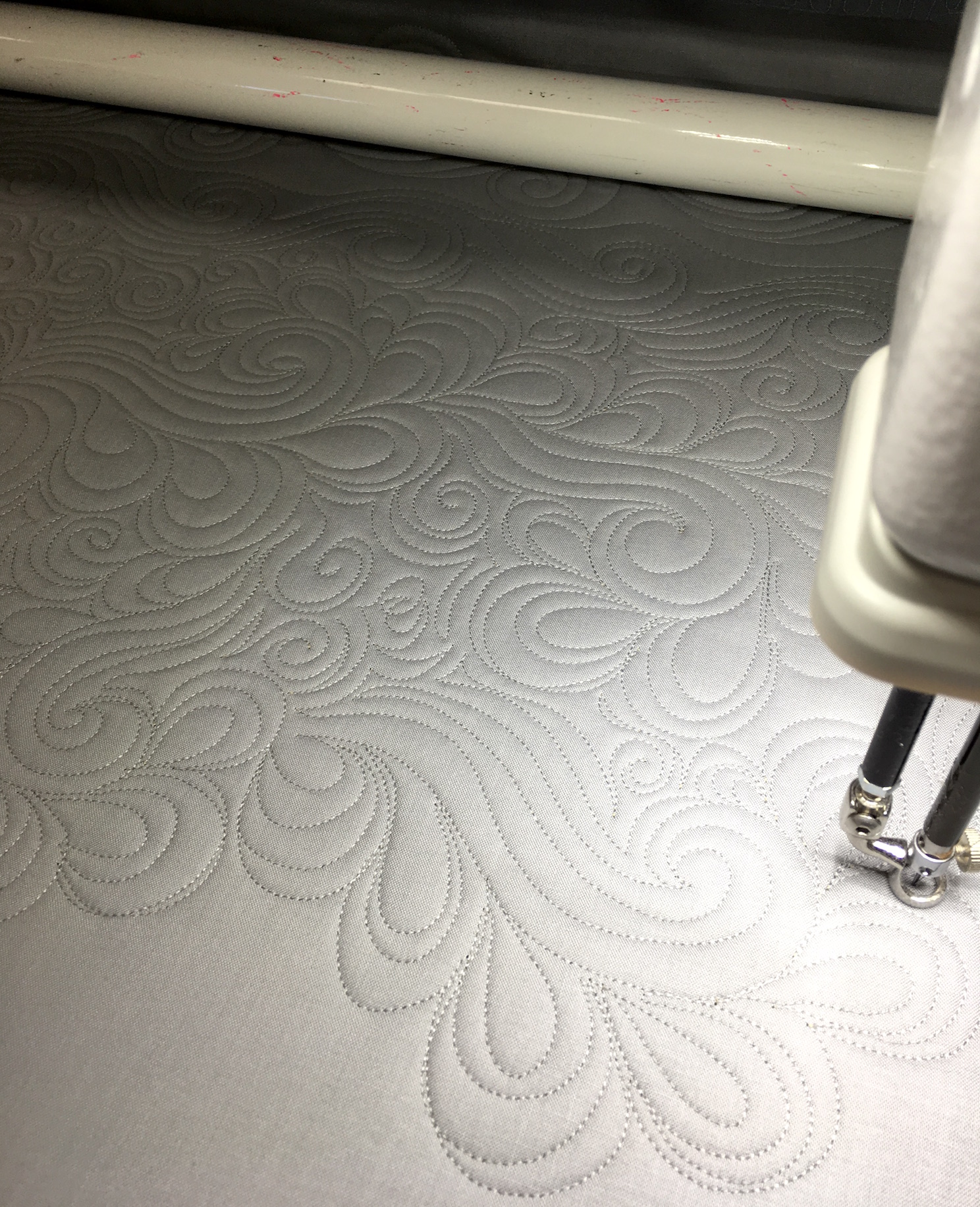 The second workshop was about Quilting the Modern Quilt and Quilting Negative Space.  Again, I had seen a number of these designs before, but it was really great to practice them.

Some samples – I really like the square in a square technique: 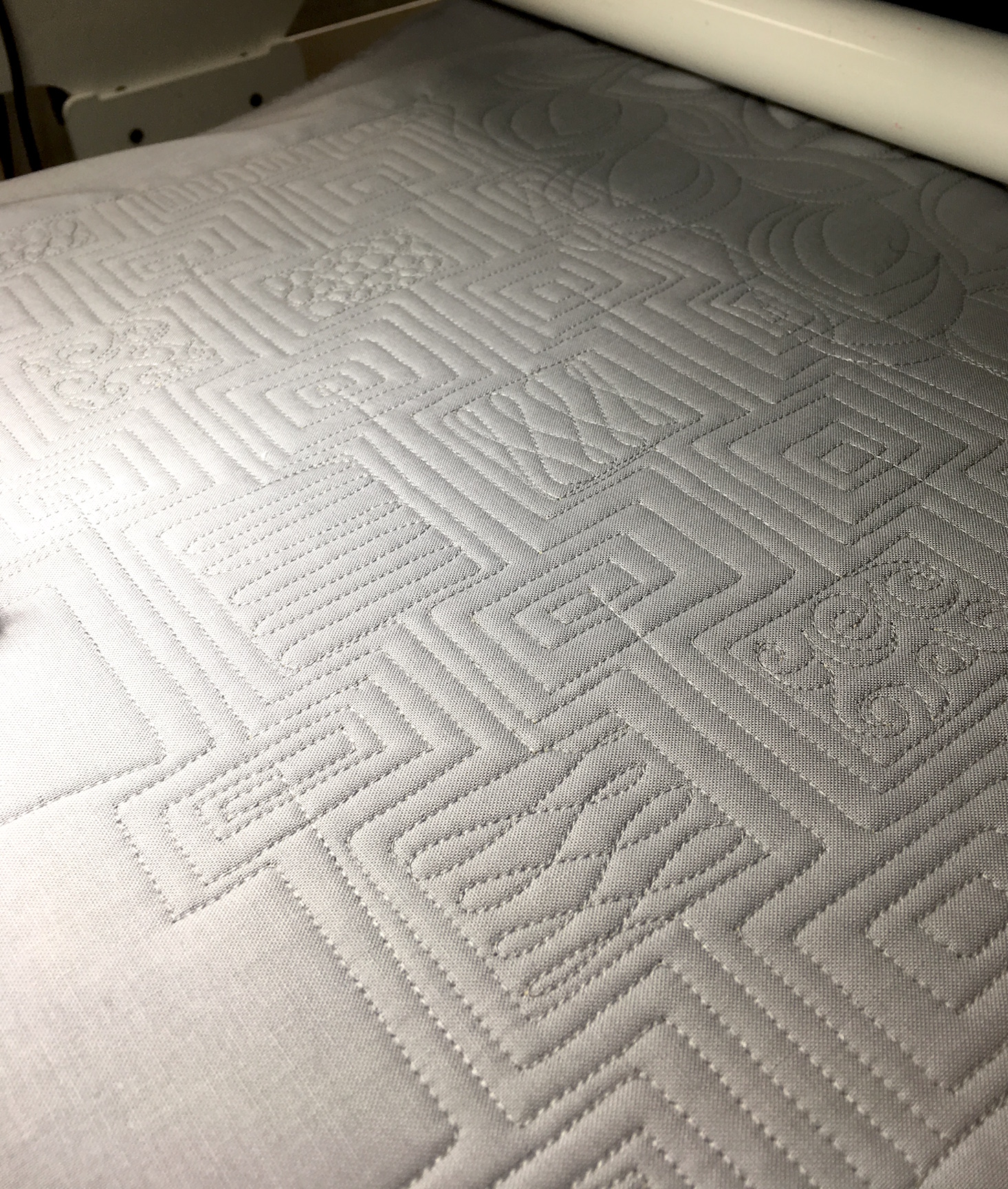 and this merging lines pattern too: 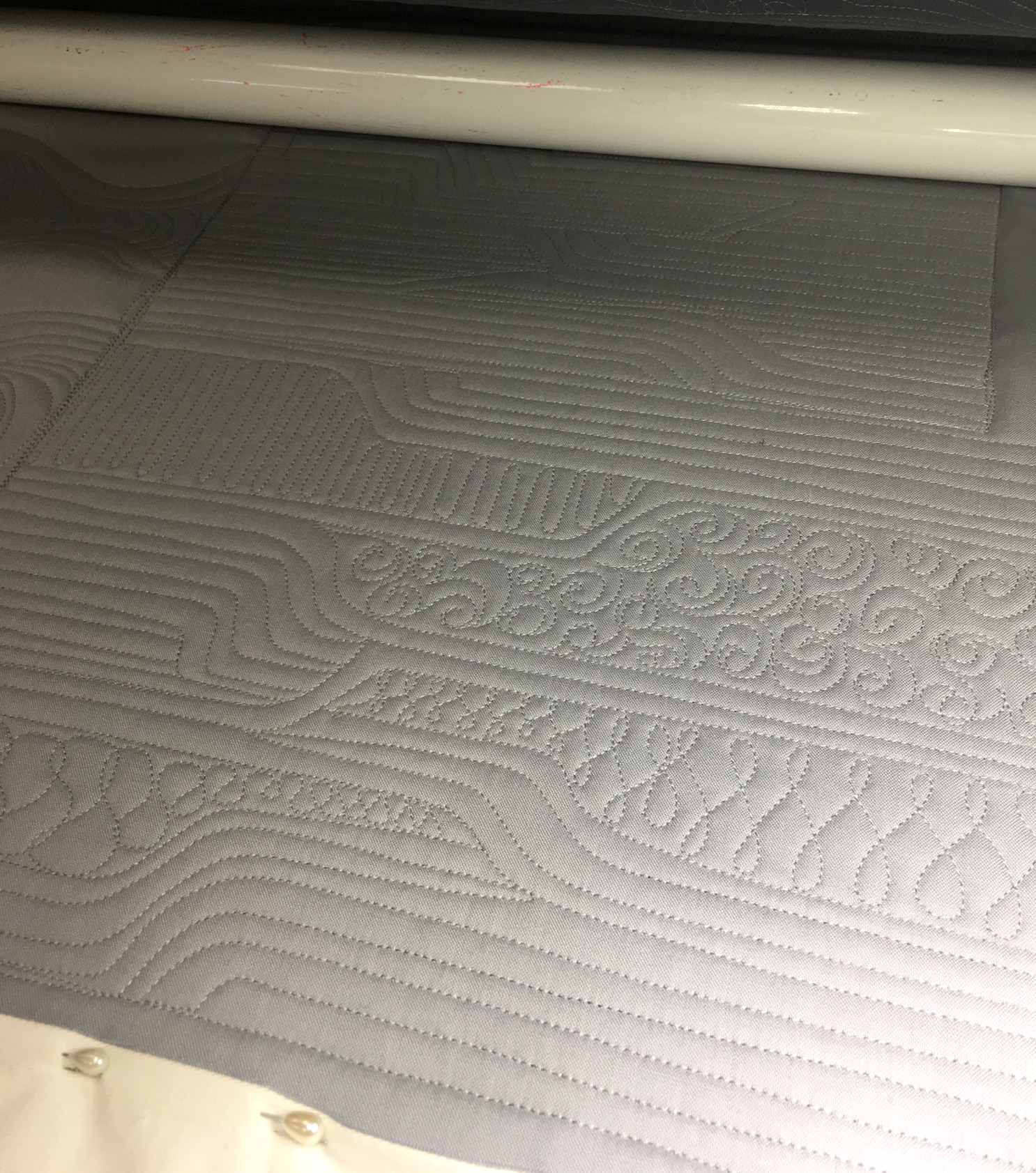 I won some fat quarters, from which I made this handy thread catcher/pin cushion.  I love this thing. 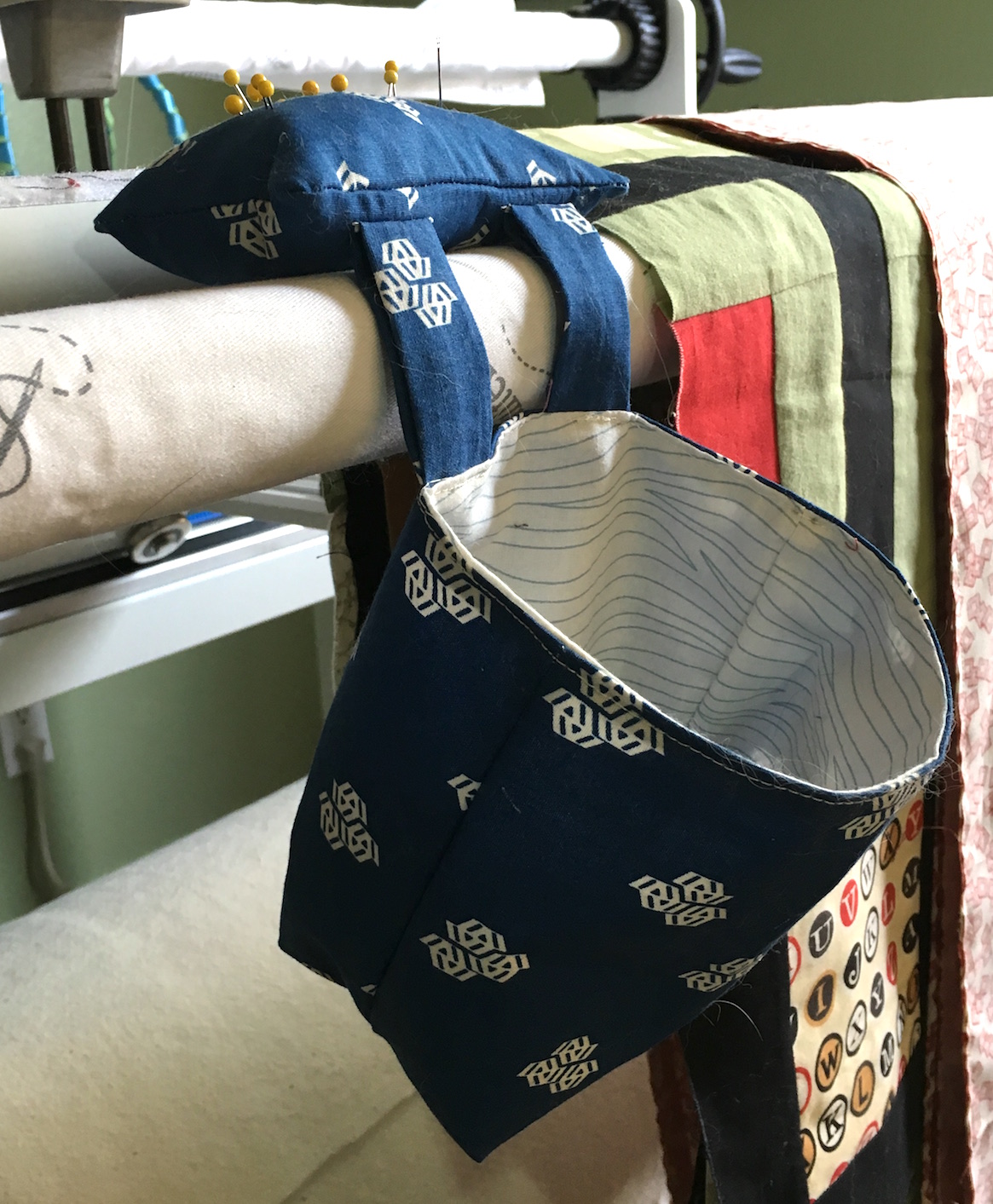 Angela also had a bunch of stuff for sale, so I decided it was my duty to take a few things off her hands: 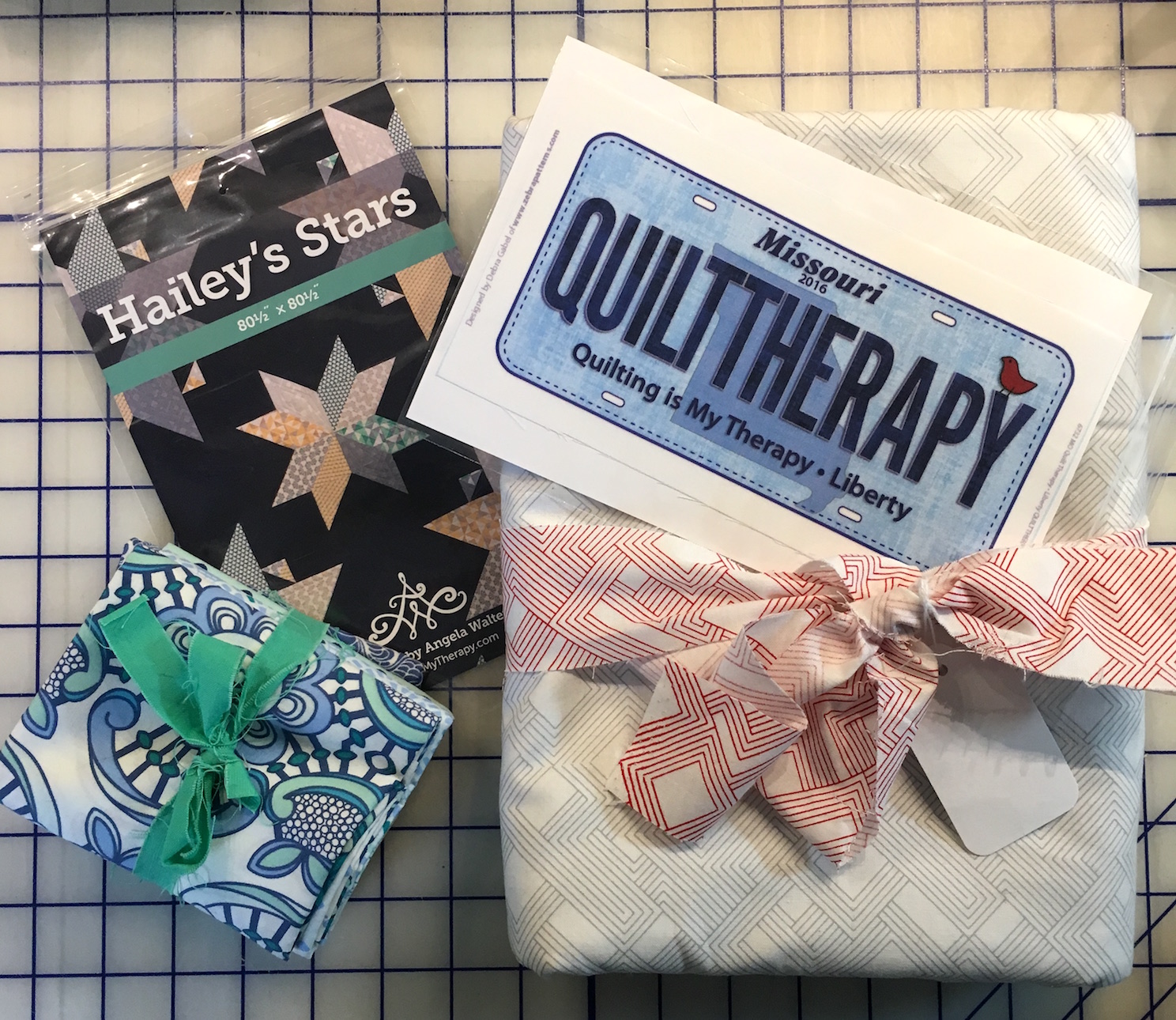 I actually won the Hailey’s Stars pattern in a drawing – I might have to make one of those.  It is a cool pattern.  The fabric on the right is a few yards of a wide backing fabric which I’m looking forward to using.

Angela was just great – so gracious and generous with her time.  She also brought her whole family with her to Albuquerque, and I think they enjoyed their time here.

I am now motivated to go off and quilt some of these quilts I’ve been afraid to tackle!

0 thoughts on “A Few Days Quilting with Angela Walters”