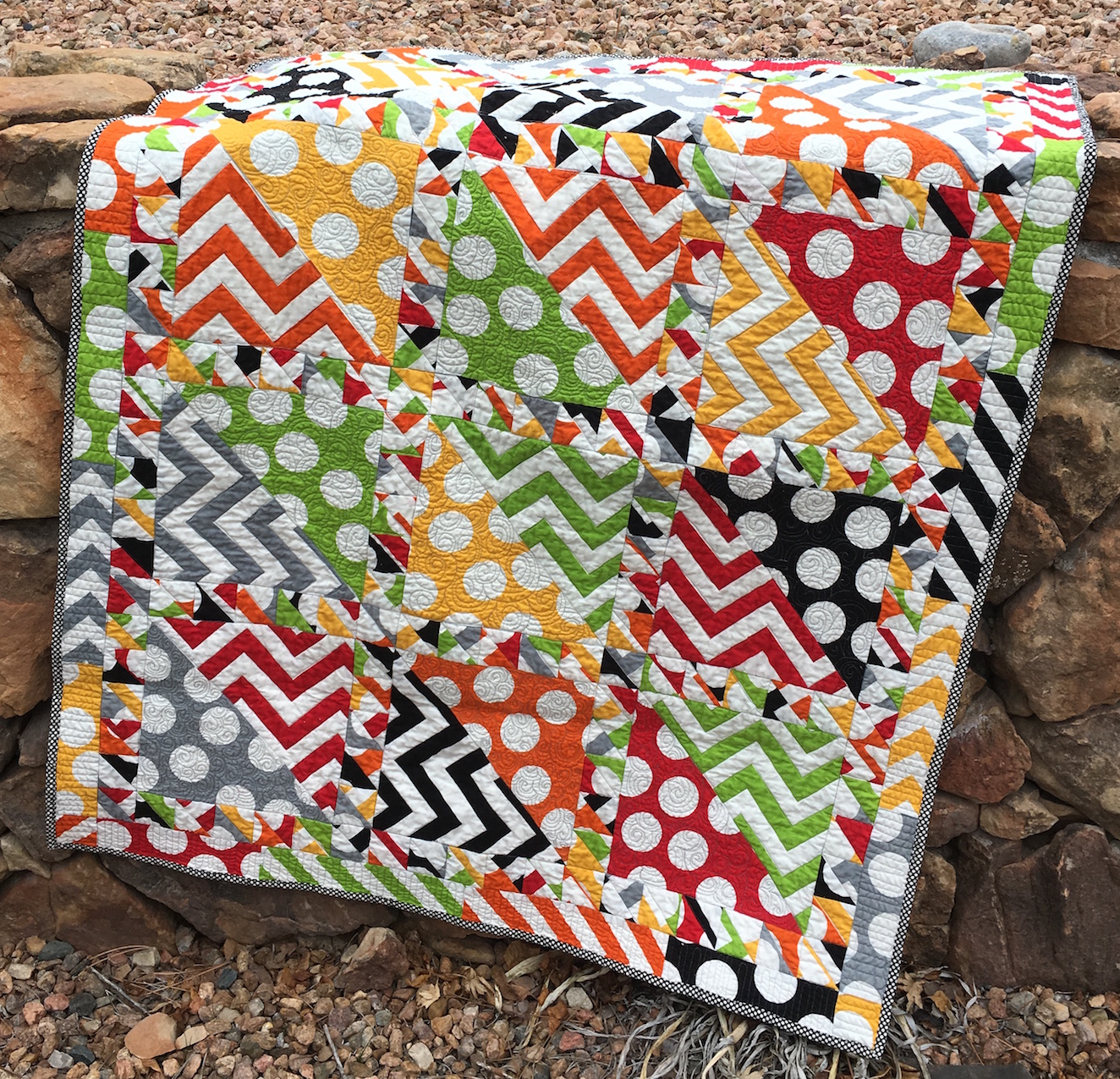 Obviously this is not the goal one sets out to achieve when one starts a quilt.  However sometimes what things look like in reality is just not quite what you had envisioned in your head.  This is one such quilt.

I got this cool pack of fat quarters with really brightly colored big graphic fabrics and I chose a pattern that I thought would work well as it had really large areas to show off the fabric.  However it also had these small HSTs used as sashing, and the triangles were so small you really couldn’t see any of the large graphic print.  It really just looked like a mess.  I finished the top, but I was so disappointed because it really just didn’t turn out like I had hoped.

Fast forward a year to my long arm classes this past summer.  I was looking for quilt tops to practice with on the long arm – tops that I wasn’t attached to.  HA!!  This Mess of a Quilt just couldn’t get much worse!  I loaded it up and gave it a try (and wrote about it in this post). 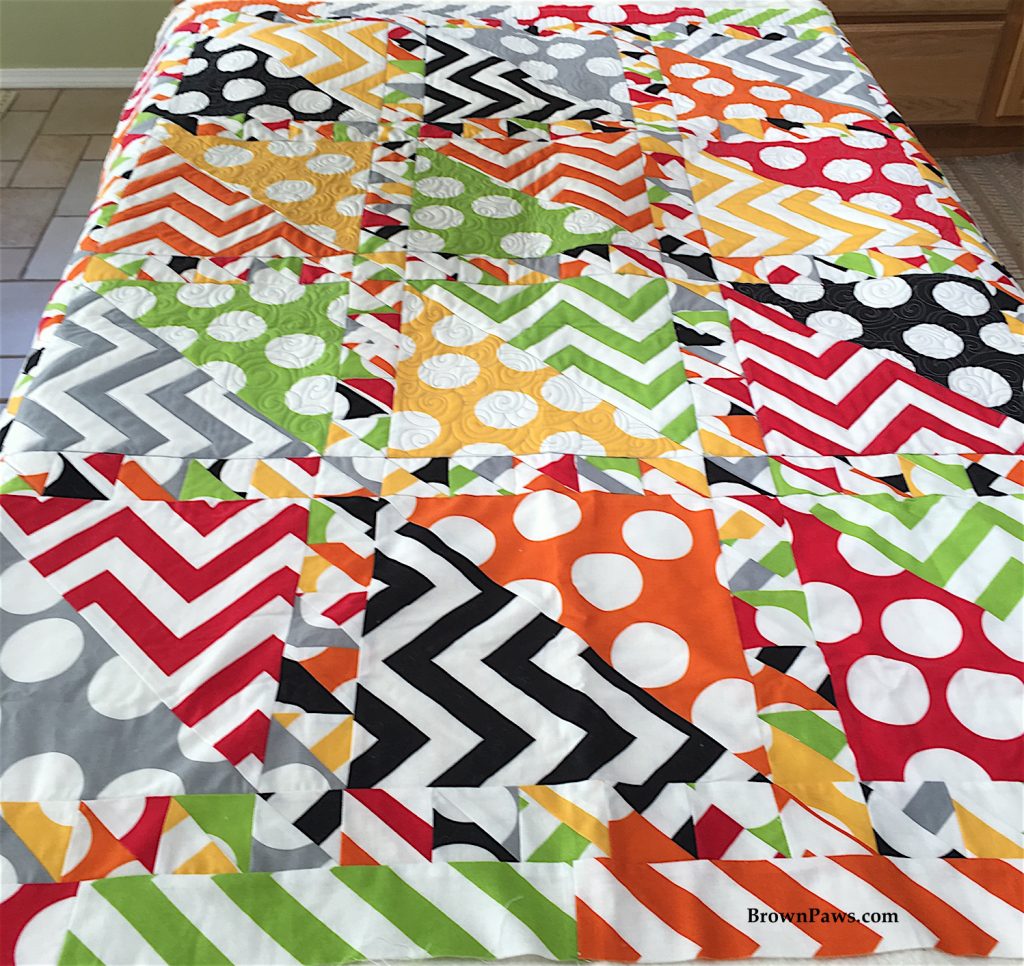 I finished that practice session in the shop with the quilt not quite done – I had the last row of blocks and the bottom borders to do.  At the time, I planned on just finishing it on my domestic machine as I didn’t have specific plans to buy a long arm.  But that changed, and I actually wound up buying the same machine I had been working on in the shop.  After working on some practice pieces, I figured out how to reload this quilt and worked on getting it finished.

Let’s just say that I’m not sure my quilting helped this quilt top in any way.  It was really good practice, but certainly not the best example of machine quilting ever completed.  But I could tell I was a lot better on this last row of blocks than I was on the first 3 rows I did at the shop.  My lines were straighter and my swirls better.

Here is the finished quilt:

Now for some truth in quilting photos…note I quilted this using a grey Aurifil thread and muslin as a backing, so mis-steps are really evident on the back.

Another goal I had for this year was to get proficient at machine binding.  I normally hand stitch down the binding on the back side, but for these long arm practice quilts I figured machine binding makes more sense.  I gave it a whirl on this quilt using this really cool black polka dot binding, and I’m pretty happy with how it came out. 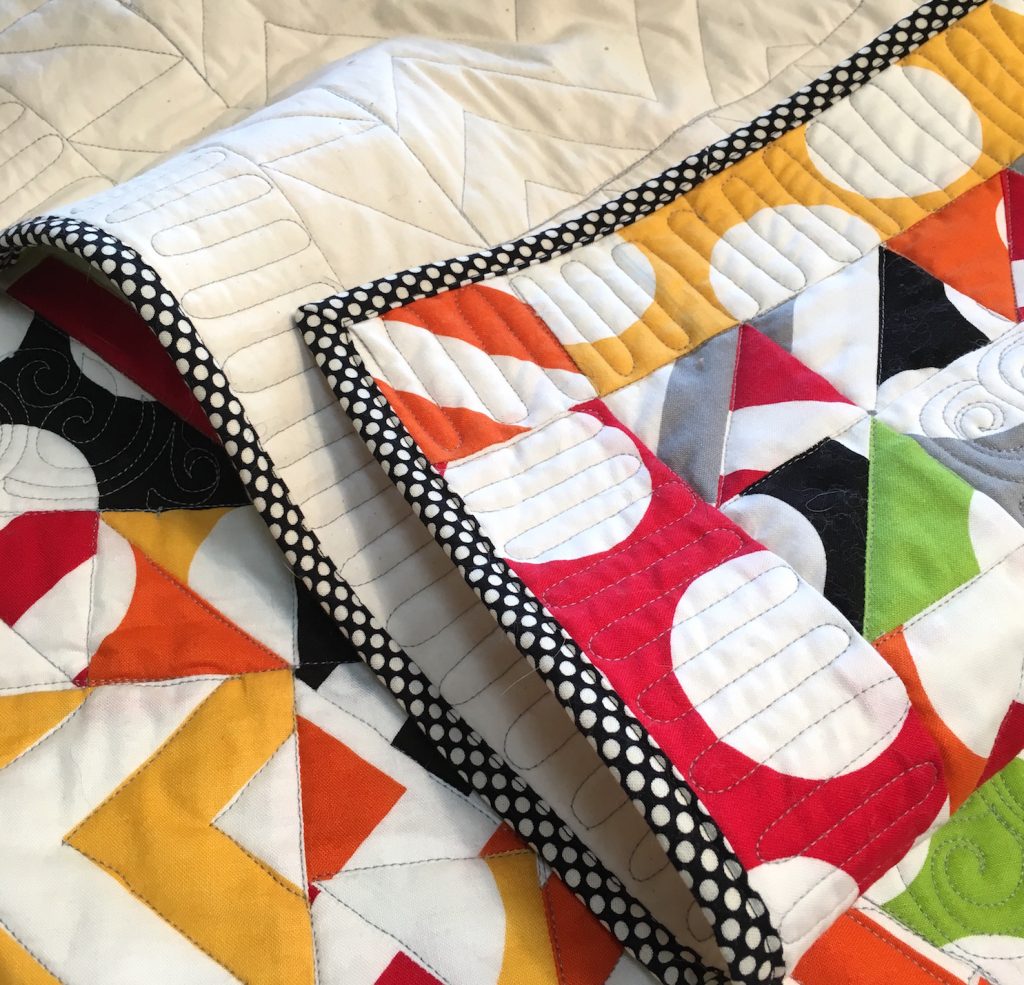 I think the stitching on the back side is supposed to wind up off of the edge of the binding, just to the side and along the backing.  I didn’t achieve this most of the time, but rather had it end up on the binding itself.  I actually prefer it on the binding, especially when the contrast between the binding thread and the backing is so great.  I’ll have to play with this a bit more and get more consistent in my stitching.

So not the most beautiful quilt ever, but I think I used it to learn and practice a lot of things I wanted to work on so I’m calling it a success! 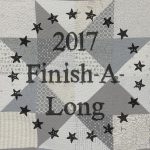 0 thoughts on “The Mess of a Quilt”