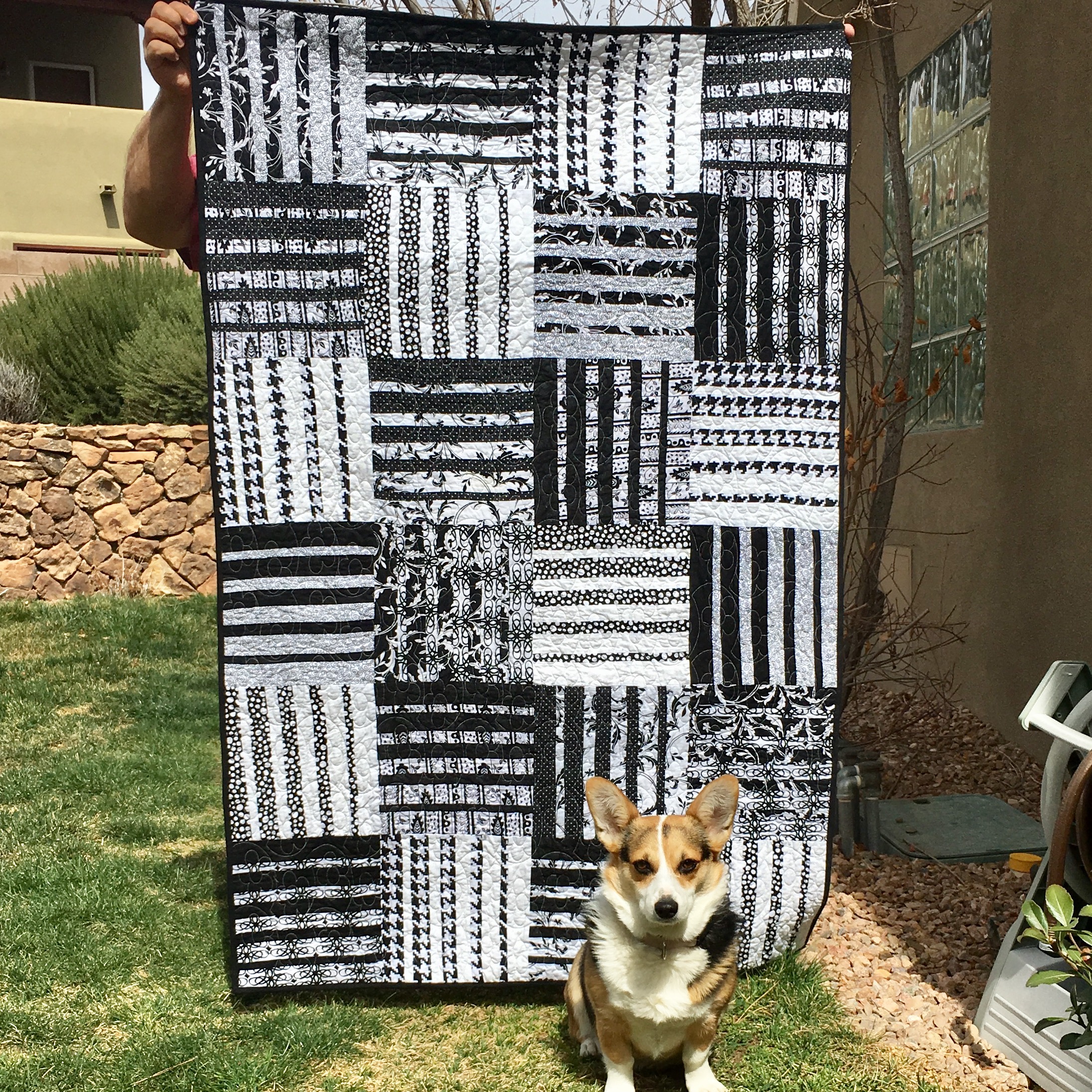 This was another pack of fat quarters I bought, which came with a pretty cool pattern.  The pattern showed blocks with 2 colors, using stripes of varying widths.  I thought it was perfect for the contrast of the black and white, and I’ve always wanted to do a black and white quilt.

Cutting it up went pretty quickly, and sewing the strips together was fast work.  However, I had previously read that sewing together strips could wind up with a very wonky and skewed block.  I tried to mitigate that problem by reversing directions that I sewed the strips, as I had read to do, but it really didn’t help much – man were my blocks wonky!  I did the best I could to straighten them up and get the top together.

From there, time to quilt.  Up to this point I had been doing all custom quilting using my longarm to get practice, but I decided to try out the Avante Prostitcher on this one.  It is a pretty slick system – you load up a quilting design, set the size of your quilt, and it automatically sews for you.  I had watched the instructional videos and had a vague sense of what I needed to do, but still had a pretty steep learning curve.  I set aside a Saturday to tackle the project, and set to work.

Loading up the instructional videos again, I set out to figure out the software.  It really was pretty straightforward process, and I had it stitching in about an hour.  I’ve tried to load a video of it stitching in action, but it appears the video is too large of a file.  You can see the video on my Facebook and Instagram pages.

I finished quilting the whole thing in about 4-5 hours, which is longer than it should have been as I had some issues getting everything reset when I ran out of bobbin thread.  But that it still pretty quick, and after adding some machine binding she was done. 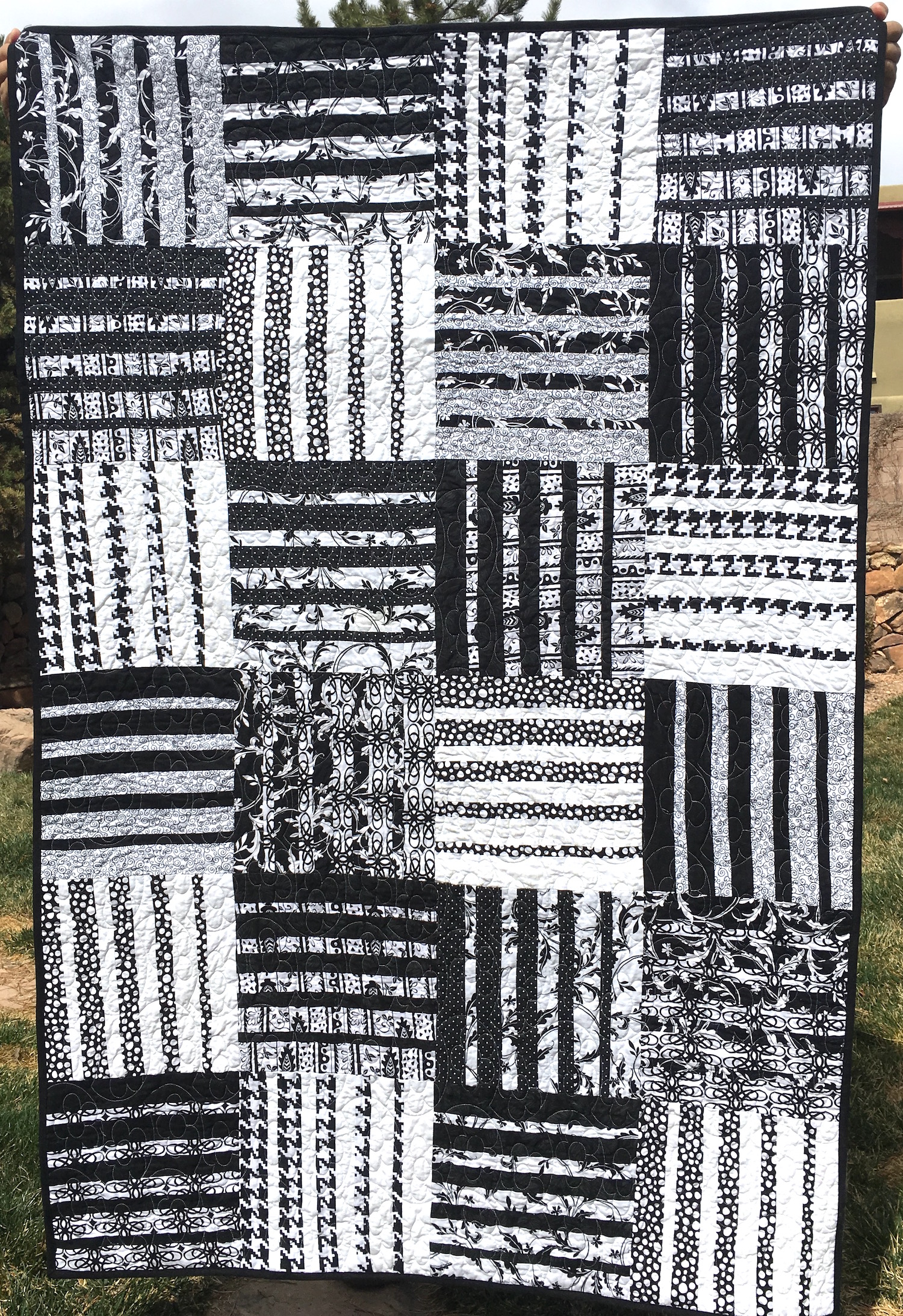 I found a cool black, white, and gray print for the back: 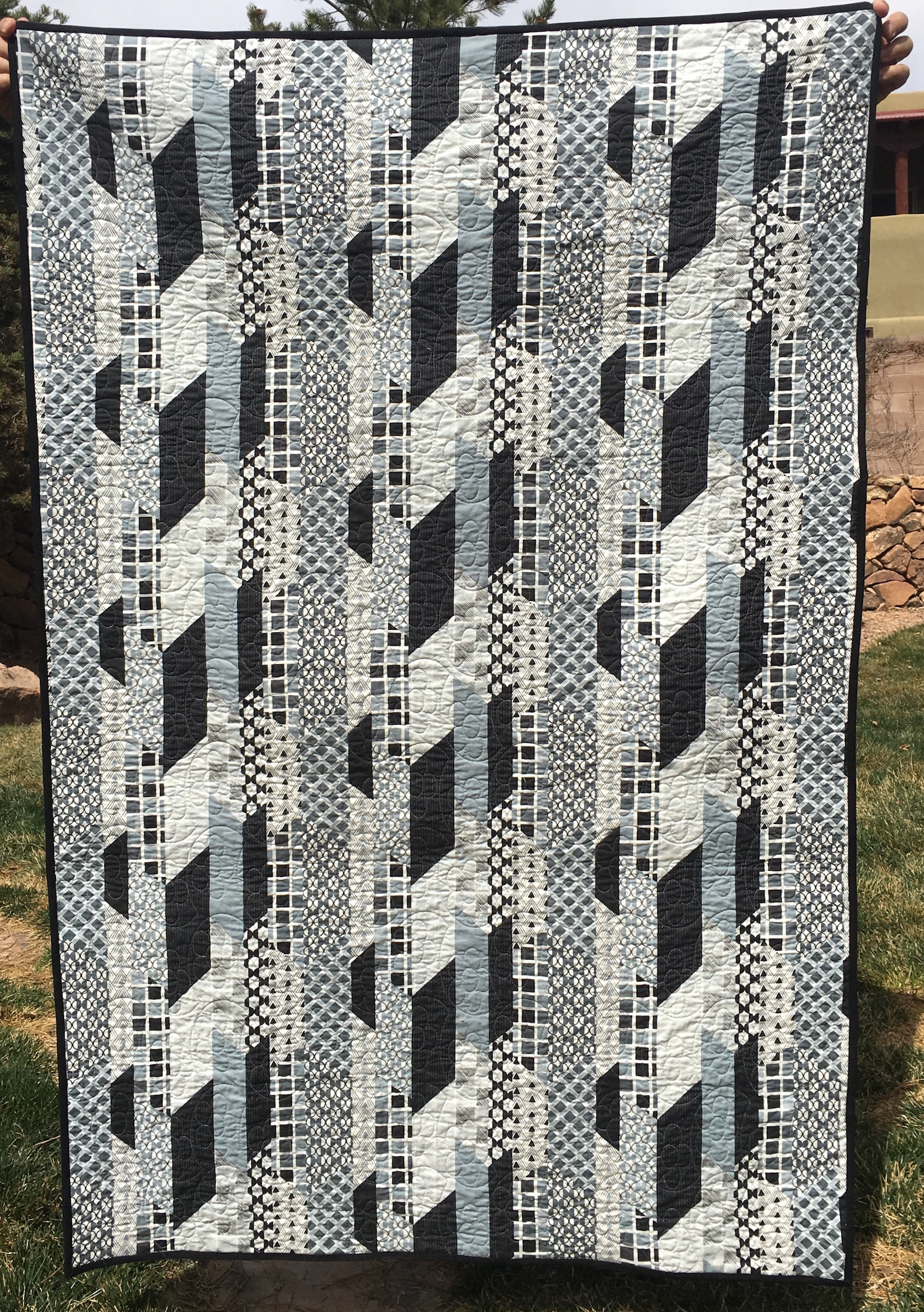 Some detail of the quilting – I chose a continuous flower/daisy design and used a light gray thread: 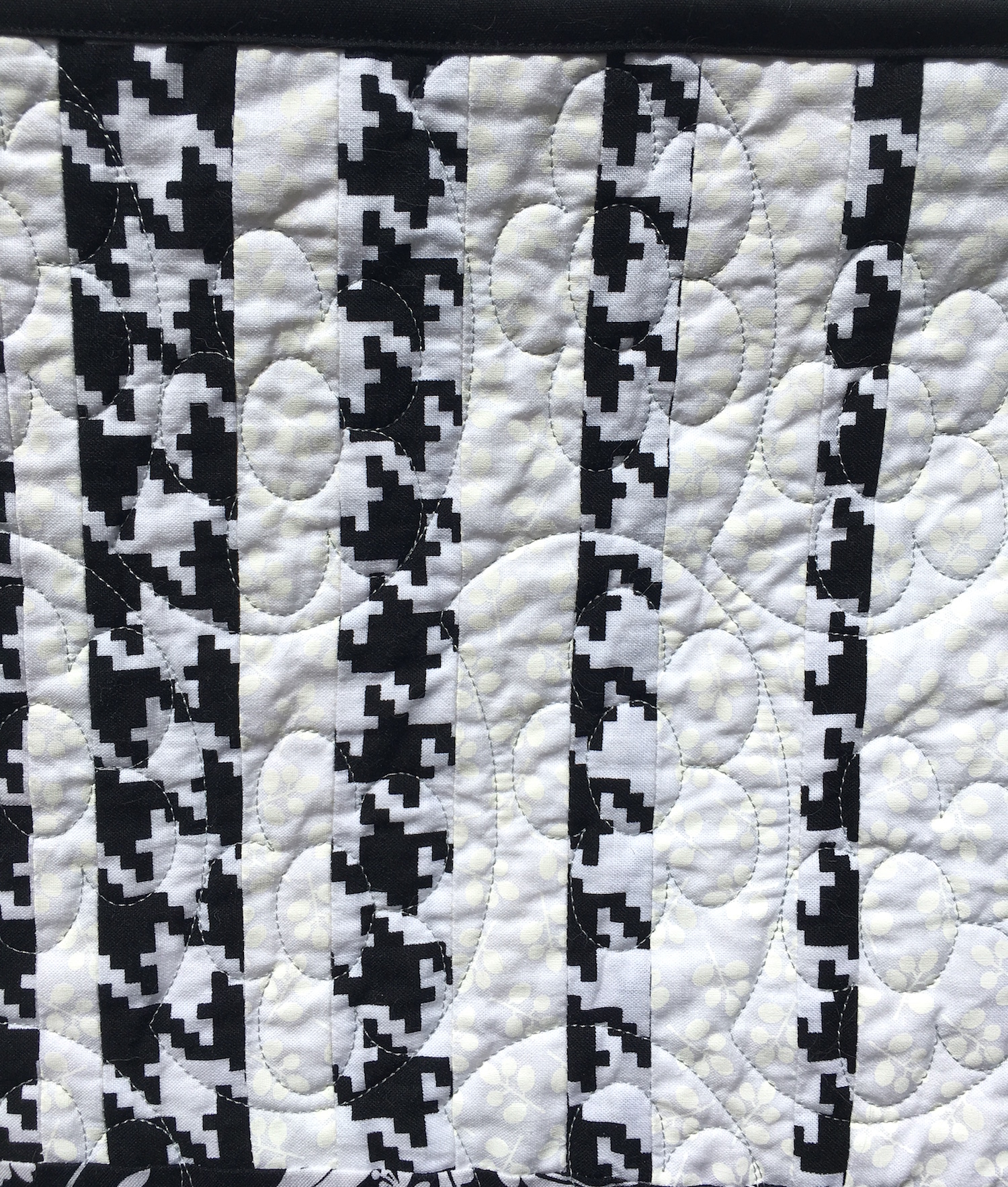 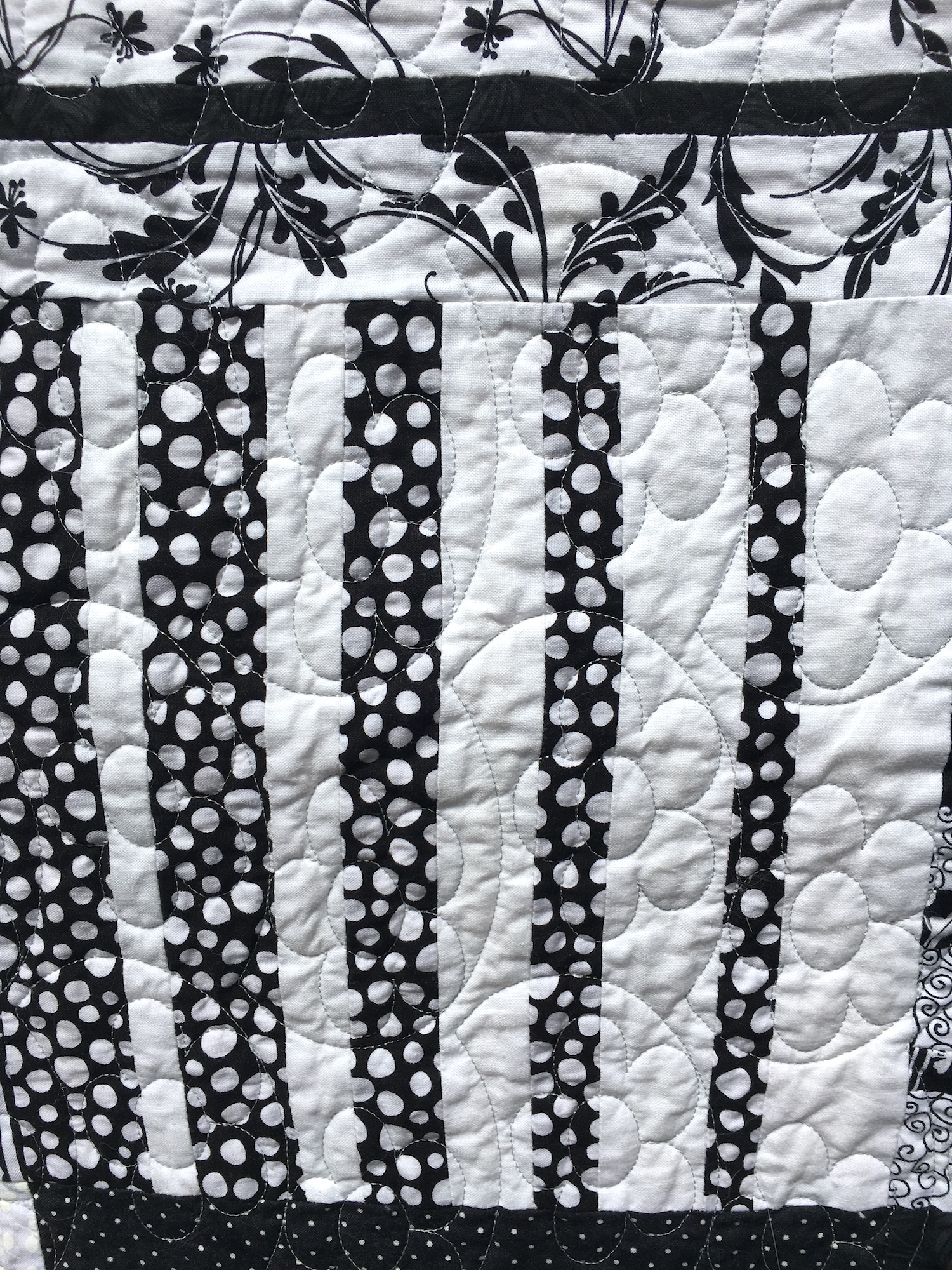 Finally, Maggie decided to get in on the photo shoot, deciding she looks really good with a black and white backdrop.  (really I think she just wanted to figure out what her dad was doing):

This quilt was another one on my Q1’17 FAL list, so I’ll be linking it up when the time comes.

0 thoughts on “Black and White Stripes”