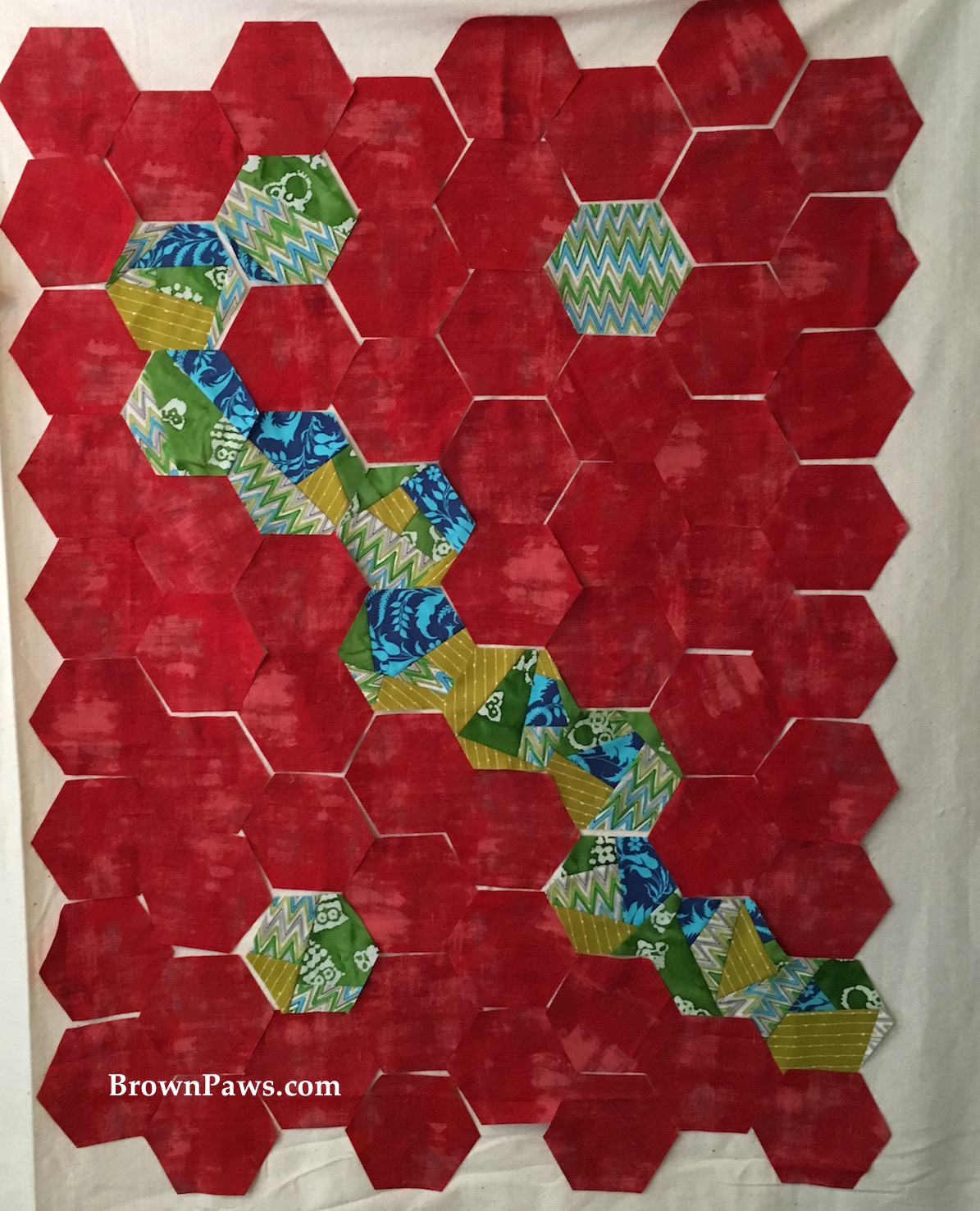 A few weeks or so ago I wrote about the scrappy hexagons I made after taking Victoria Findlay Wolfe’s 15 Minutes of Play class.  Next step in the process – making the quilt top!

These were the hexagons: 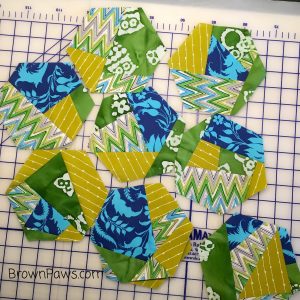 They were made from my 4 cuts of fabric I got at my ABQMQG’s June meeting challenge.  I was lucky they all blended together pretty well.  The challenge was to reference the Modern Quilt Guild’s definition of a Modern Quilt and use those attributes to make a modern quilt with the 4 cuts of fabric acquired at the meeting.  I had already achieved one attribute – improv piecing.  As I only had about 12 hexies to use for the quilt, I had my eye on using the “alternate grid work” and “expansive negative space” attributes as well.

In her class, Victoria recommends the use of a design wall to really look at your quilt as it is being made.  I don’t really have room in my sewing room for a full-time design wall, but I hung up some batting temporarily to use to place my blocks.  This was my first idea for a setting: 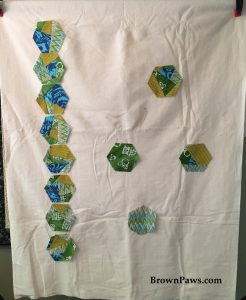 I was thinking a vertical line, with a few random hexies off to the side.  I also toyed with the idea of pulling a hexie or two out of the line, leaving holes that would be filled with background fabric.  I thought this layout was ok, but I really wasn’t finding it very interesting.

We spend a lot of time in Pagosa Springs, Colorado, and to get there from Albuquerque you drive through Northern New Mexico.  It is a beautiful area with red rocks and pretty streams, and you might know that Georgia O’Keeffe spent a lot of time there.  I have this print hanging in my house and I love it – it is called Rio Chama, or Blue River…I’ve seen it listed as both.

Just looking at this painting makes me happy and makes me think of all the wonderful time we’ve spent up north.

I had taken my hexies to Victoria’s lecture while she was here, and when I shared them with her she picked up on the blue scrap in each of the hexies and noticed that you could arrange them to highlight those edges of blue.  Between that observation and the painting, I changed the layout to this: 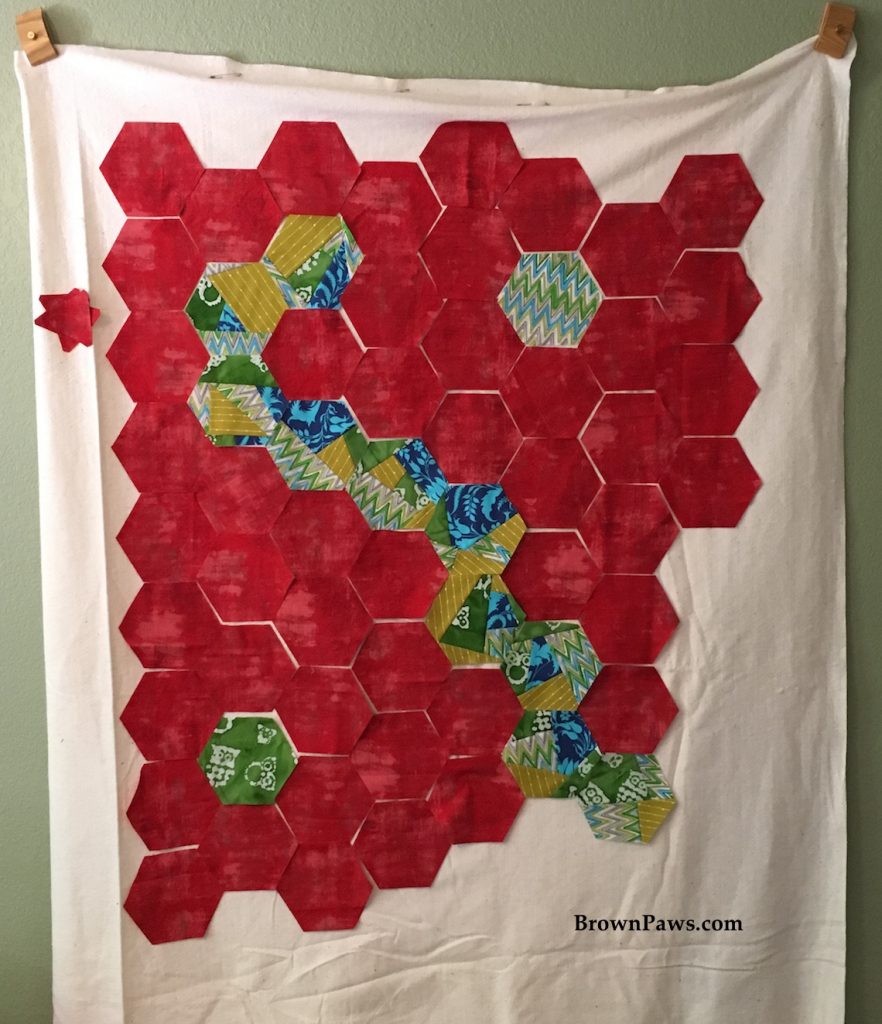 It looks to me like a river running through the red rocks.  And I had this zig zag fabric that I thought looked like the mountains around Pagosa, so I put one hexie of that fabric in the upper right to represent the mountains.

I was able to make a few more hexies to pull out more of that blue, and oriented the zig-zag hexie to look more like mountains.  This is the final layout: 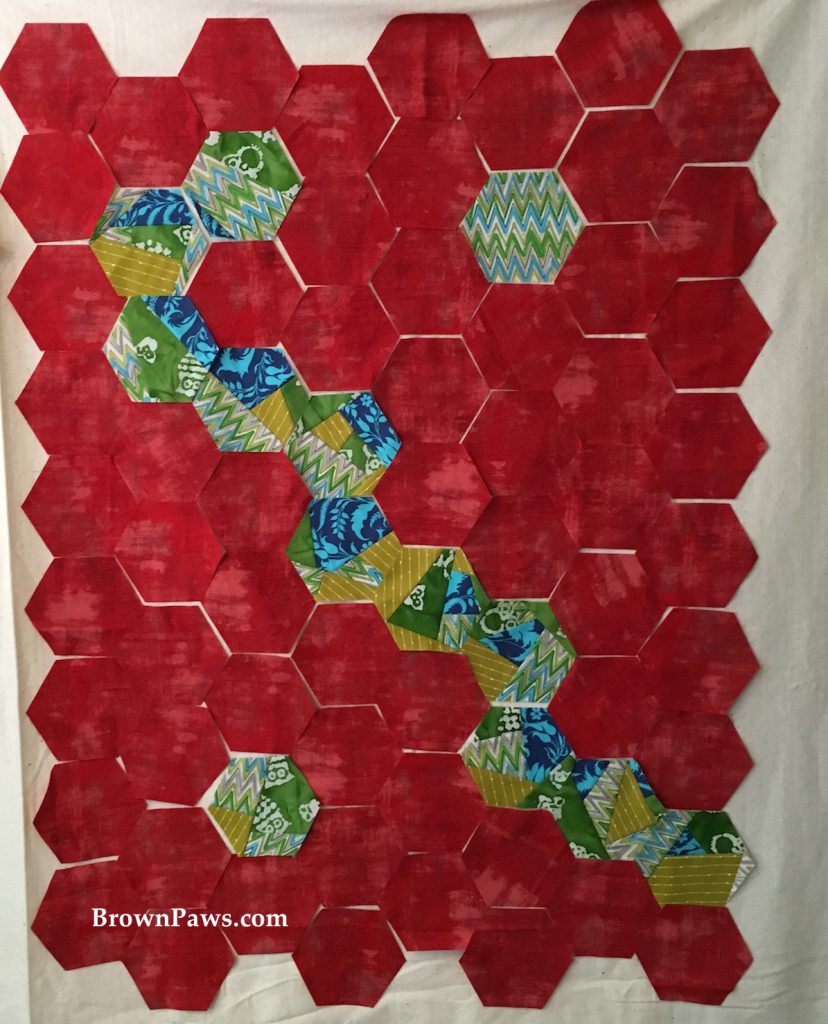 This really made my skirt fly up, as Victoria would say.  The red is a Modern Grunge fabric, and I really like the contrast it gives to the green/blue hexies.  And I just love my river!

I made the whole thing out of hexagons rather than doing the red in one large solid piece so I could drop in those random hexies in the negative space, and so I could practice doing y-seams.  I made a baby’s block quilt a long time ago and nearly quit due to frustration with all those y-seams.  Victoria showed us how to do them more easily and I wanted to practice.  I will say that the first few were a bit rough, but I got on a roll and they got easier. 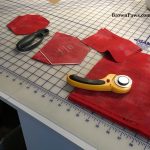 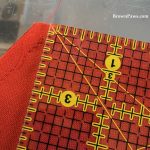 So now on to quilt it!  I have some good ideas for what I want to do, using the river/mountain/nature theme and using my recent machine quilting study.  I think it will be cool.

Lastly, here is Maggie working hard, helping me with the layout. 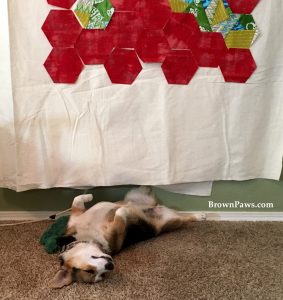 Corgi life is so hard.